his past Wednesday we revealed a handful of pieces of art in the Creative Team's Planeswalker's Guide for Born of the Gods. Among those pieces was the first look at the Theran god Mogis. 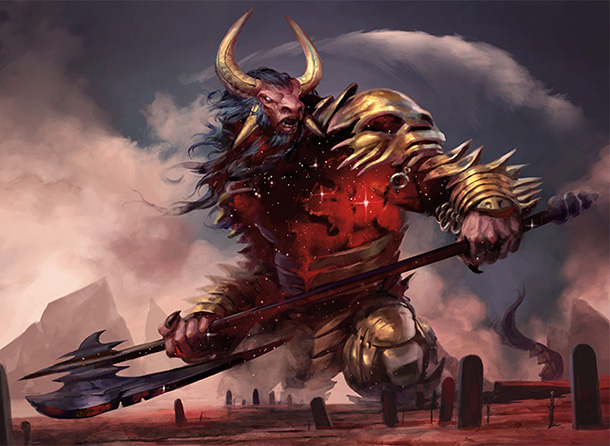 What I love in this piece, aside from the total awesomeness, is that if you look at Mogis' feet you will see stones and at first you won't be sure what you're looking at. But as you look you might realize they are headstones marking a battlefield!

Arissa. A hero of recent Iroan games is a woman called Arissa. She comes from a little-known village and defeated all comers in javelin at the games, but that is not what gained her immortality. In a fit of jealousy, Mogis sent a black, bat-like creature to snatch the young son of an Akroan hero during the ceremony following the games. As it flew into the air with the child, Arissa threw her javelin farther than humanly possible, skewering the bat-thing; she caught the babe and returned it safe and sound.

Now that you've seen Mogis, perhaps you'll remember Arissa and her act of bravery to save a young Iroan.

I would dive further into Born of the Gods but we're going to be busting that wide open next week as previews for the new set get rolling, so you'll just have to wait!