ecently, this question came in over the Ask Wizards Hotline:

Well, according to the DCI, the lowest number that belongs to someone who played at least one sanctioned match in the last year is "1000". So officially, there aren't any active numbers that are fewer than four digits.

However! There's a player whose number is technically "40000001", but that's just because of the eight-digit format. The "4" is just a check-digit. As far as we at Magic Arcana are concerned, the player's DCI number is "1". He's Peter Leiher, and here's the story.

Back in the mists of time (May 1999), at 1998-99 Pro Tour–New York, there was a special side event called "The Sideboard Invitational." The idea is that players who had just missed various cuts in the Pro Tour would get to play in their very own side event, with the prize being a one-digit DCI number. The contestants were:

So once these eight players had been assembled, they faced off in a one-of-a-kind eight-player tournament: Oversized Rochester Draft! 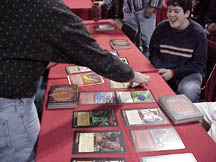 Wizards of the Coast used to print these 6"x9" cardboard cards as promotions and prizes, and by 1999, we had a pretty big list of them. So big that we were able to put together 24 "packs" and let people draft them!

Naturally, the cards represented an unusual cross-section of Magic. There were Black Lotuses and Blacker Lotuses. And thanks to a cycle of Mirage-block cards, it was possible to draft Squandered Resources and Cadaverous Bloom and try to live the ProsBloom dream.

Peter Leiher, however, spotted an even better combo in the card pool: 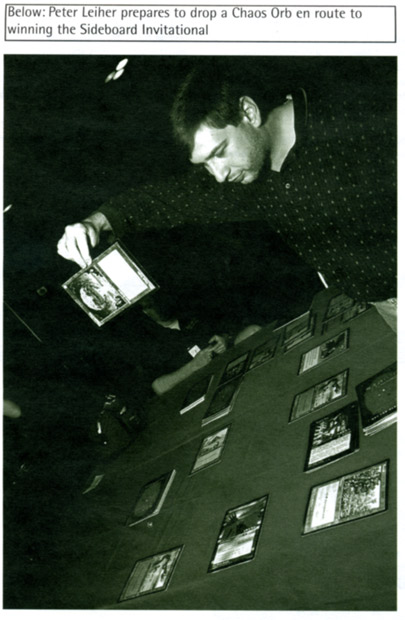 That's a giant Chaos Orb in his hand. It turns out it's hard to space your cards out far enough to avoid a giant Orb. And it turns out that Guardian Beast puts Chaos Orb over the top:

Guardian Beast says that your artifacts can't be destroyed. And Chaos Orb destroys itself, instead of using the "sacrifice" template. Using this little combo, Leiher was able to destroy all who stood in his way, and was awarded with DCI Number 1.