The Magic 2012 Event Decks will be available for sale in English, French, German, Italian, and Japanese on August 12, 2011 for $24.99. Unlike Intro Packs, which are for fairly new players, these are designed to let you enter the world of tournament play knowing you've got a powerful deck that will let you be immediately competitive. 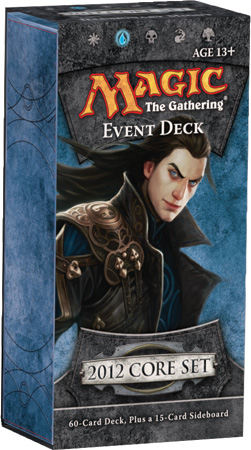 With the "Illusionary Might" deck, you're going to take the beatdown to your opponent starting on the very first turn of the game. Aggressive creatures like Phantasmal Bear and the Phyrexian mana–fueled Porcelain Legionnaire hit hard and fast. Meanwhile, cards like Æther Adept, Mana Leak, and Mind Control let you control the tempo of the game, ensuring that your pressure holds up even as your opponent attempts to mount a defense.

Spined Thopter and Porcelain Legionnaire let you pay life to get them onto the battlefield a turn sooner, and you should take full advantage of that—your Glimmerposts can gain that life back, after all. Your most powerful card by far, however, is Grand Architect. Not only does it allow your smaller blue creatures to hit harder, but it lets you cast Precursor Golem and Steel Hellkite two turns sooner. If you have the extra mana, you can even use Grand Architect to turn your artifact creatures blue temporarily to get an extra +1/+1!

Against fast decks, you'll want to trade your creatures with theirs whenever you can, either by blocking or by putting the opponent on the defensive. Use your Preordains to get to your late-game bombs as soon as possible. When you're playing against a slower deck, though, be sure to keep mana open to cast Mana Leak to protect your creatures (although nothing can protect Illusions from dying once they've been chosen as a spell's target). This strategy will force your opponent to cast creatures to block with. Then you can either "bounce" them with Æther Adept or drag them over to your side with Mind Control.

Your sideboard can take your deck in different directions. Playing against a control deck full of powerful spells, card drawing, and only a small number of game-winning threats? Bring in Negates, Stoic Rebuttal, and four copies of Neurok Commando, then beat them at their own game! Up against an army of giant creatures that clog up the board? Frost Breath and another Mind Control let you impose your will on the battlefield. Finally, Flashfreeze and Master Thief provide some added value against red, green, and artifact strategies should those show up in your area.

You can also evolve the main deck in a variety of ways. If you max out with four copies of Grand Architect and add some bombs like Wurmcoil Engine and Mindslaver (and maybe a Treasure Mage or two to go find them!), you could be plopping giant monsters onto the battlefield as early as turn three. Alternatively, if you prefer a more swarming approach to combat, additional copies of Lord of the Unreal and Phantasmal Image can overwhelm your opponent with wave after wave of Illusions, while cards like Frost Titan stand by and mop up whatever's left. 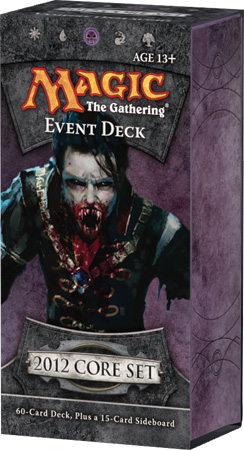 Competitive Magic players often face the difficult choice between an aggressive deck that wins as fast as possible and a combo deck that uses powerful synergies to generate an insurmountable lead. With the "Vampire Onslaught" deck, you don't need to make that choice—you can have both!

Efficient attackers like Vampire Lacerator and Vampire Nighthawk hit hard enough on their own to win some games. With an excellent mana curve and eight removal spells (don't forget to "kick" your Gatekeepers of Malakir!), this deck can be played as a straightforward beatdown deck. Sometimes you're just going to drop a 4/4 Vampire Outcasts on the fourth turn and your opponent won't be able to catch up. But different cards in this deck can combine for an out-of-nowhere combo kill. The more you play with this deck, the more comfortable you'll be with those strategies. For example, Pawn of Ulamog effectively lets you get double use out of every creature you sacrifice to make Bloodthrone Vampire bigger, and Kalastria Highborn "drains" your opponent for 2 life every time you sacrifice a Vampire in that loop. That's a lot of life loss in a hurry.

Or suppose you have a creature equipped with Blade of the Bloodchief, a sacrifice outlet like Bloodthrone Vampire on the battlefield, and a Bloodghast anywhere in sight. Sacrificing Bloodghast gives you two +1/+1 counters on the equipped creature and an extra 2 damage in combat from the Bloodthrone Vampire. Then play a land and do it again! It's as though every land you draw is an extra 4 damage—and that's before your opponent is so low on life that Bloodghast has haste!

Your sideboard allows you to tailor your deck to beat what you're up against in games two and three. Against creature decks, you'll want to sideboard in Skinrenders and Go for the Throats to back up your Gatekeepers of Malakir—it's very possible to kill every single monster thrown at you. Vampire Nighthawk grants you some much-needed life against red decks, while Vampire Hexmage helps control your opponents' planeswalkers. Finally, against other combo decks or control strategies that rely on casting a single powerful spell, Distress allows you to deal with threats before they're even cast.

After you get more familiar with the deck, you might decide to amp up its combo elements. One way to do that is to max out on Bloodghast, Kalastria Highborn, and Blade of the Bloodchief. Alternatively, you might decide to focus on the beatdown approach. If so, you'll want to cut the higher-end spells for faster threats. You could decide to build a dedicated Vampire deck with cards like Malakir Bloodwitch from the Zendikar set or the brand-new Bloodlord of Vaasgoth from Magic 2012.

2 Blade of the Bloodchief 1 Mimic Vat