here are five intro packs for Magic 2012. And here's what's in them! 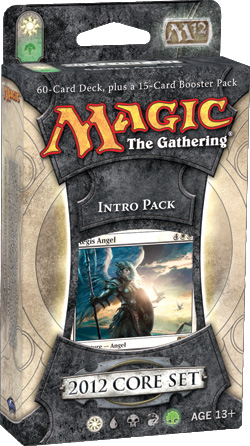 The nice thing about being a powerful Planeswalker is that you don't have to play by the rules. For example, you have the ability to custom-build your ideal creature, and that's exactly what the "Sacred Assault" deck lets you do!

This deck is packed full of Auras, which are a special kind of enchantment. All the Auras in this deck target a creature as you cast them, then enter the battlefield attached to that creature and modify what it can do. Some, like Pacifism, make the creature worse, so you want to target your opponent's creatures with them. The rest make your creatures better, and that's where the fun begins!

Of course, you have to start out with some creatures first. Gladecover Scout and Sacred Wolf each have hexproof, meaning your opponent can't target them with spells or abilities. Give one of them +1/+1 and protection from creatures by enchanting it with Spirit Mantle, or +2/+2 and a regeneration ability by enchanting it with Trollhide, and it becomes nearly impossible for your opponent to deal with.

The deck also features a number of Griffins. These flying creatures are difficult for your opponent to block, so making them more powerful with Auras is a quick ticket to victory. Perhaps the best target of all is Thran Golem, an artifact creature that gets supercharged as long as it's enchanted!

Once you've played the deck for a while, you can decide how to customize it. If you like the Griffin theme, increase the numbers of those cards. If you like the Aura theme, extra Mesa Enchantresses is a good call, as is the stunningly powerful Angelic Destiny—an Aura that turns the creature it's enchanting into a mighty Angel! 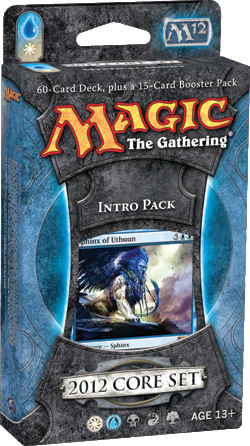 Attack early, attack often! That's the motto of the "Mystical Might" deck, which seeks to overwhelm your opponents with elusive—and illusory—creatures before they can mount a defense.

The deck's Illusions are powerful fighters, but they have a catch: If they ever become the target of a spell or ability (even by you), the magic that's keeping them intact will fail and they'll be put into the graveyard. That's where Lord of the Unreal comes in. Not only does this creature give your Illusions +1/+1 so they hit harder, but it also gives them hexproof, so your opponent isn't even allowed to target them!

Once you have a small fighting force, you have a few options to keep your opponent off -balance. You can use counterspells, like Cancel, and temporary removal spells, like Unsummon and Oblivion Ring, to keep potential blockers off the battlefield while your army finishes the job. It doesn't take that many hits from 2-power creatures to knock your opponent all the way from 20 life to 0! Or you can ramp up the aggression by casting gigantic flying creatures such as Sphinx of Uthuun. Just keep attacking and some of your creatures are bound to get through!

A simple way to make the deck more powerful is to increase the Lord of the Unreal count. Their bonuses stack up, so if you have two of them and one Phantasmal Bear on the battlefield, the Bear is 4/4! Phantasmal Image also supports this theme, since it can enter the battlefield as an Illusion copy of the best creature any player has. If you like the fearsome flier theme instead, Djinn of Wishes is a perfect addition to your air force.

1 Lord of the Unreal 1 Sphinx of Uthuun
60 Cards 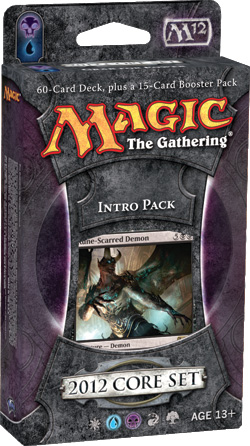 goal of the "Grab for Power" deck is to have three specific artifacts—Crown of Empires, Scepter of Empires, and Throne of Empires—on the battlefield at the same time. If you've got all three, each one powers up, delivering not just a good effect (as it does normally), but an absurdly brutal effect. Your triumph won't be far behind.

Finding all three is not an easy quest. Creatures such as Reassembling Skeleton, Warpath Ghoul, and Zombie Goliath will buy you time by battling your opponent's attacking creatures. Removal spells such as Doom Blade and Brink of Disaster can take care of your opponent's especially nasty creatures. In the meantime, creatures like Azure Mage and Merfolk Looter, as well as spells like Ponder and Divination, let you dig through your library looking for the artifacts. Diabolic Tutor and Rune-Scarred Demon are especially effective at finding the last piece of the puzzle.

Naturally, a wise ruler always has a backup plan. If you see an opening in your opponent's defenses, clear out any blockers with your removal spells and simply go on the assault with your terrifying horde of Zombies, Vampires, and Shades. One way or another, you will vanquish all who challenge you! 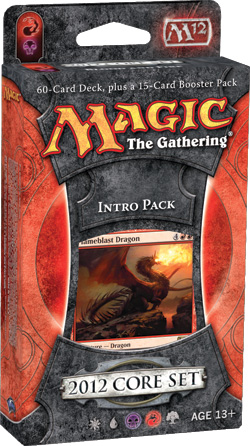 This deck features more than a dozen creatures with the bloodthirst ability. As each of them enters the battlefield, it checks to see if your opponent has been dealt any damage that turn. If so, the creature arrives with some +1/+1 counters on it. So to get the maximum potential out of them, you'll need ways to deal damage to your opponent first.

If you can't deal damage to your opponent, it's okay to cast bloodthirst creatures anyway. A powered-down Duskhunter Bat can still fly over the battlefield to damage your opponent, meaning your next bloodthirst creature will be living large. Be creative about how you enable bloodthirst. Spells like Shock and Incinerate can clear out potential blockers, or they can deal damage directly to your opponent. The 7-power Crumbling Colossus has trample, so it's likely to get some damage through if it attacks. Take any opportunity you can find!

You can finish off the game in a number of ways. Spells like Hideous Visage and Tectonic Rift can leave your opponent unable to block. Warstorm Surge fires off a salvo each time you get a new creature. And if all else fails, just attack with Dragons! 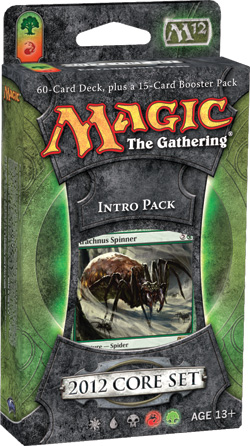 If you believe that bigger is better, the "Entangling Webs" deck is right up your alley! Loaded with giant predators and crafty spiders, this deck is perfect for an all-out rumble in the jungle.

At the top end of the food chain are Garruk's Horde and Arachnus Spinner. The Horde is insanely big in its own right, plus it seeks out more creatures for you to cast! The Spinner lets your Spiders ensnare opposing creatures in Arachnus Webs, making it that much easier to attack. Don't be shy about attaching an Arachnus Web to a creature with power 4 or greater. It'll immobilize that creature for the rest of the turn, then after Arachnus Web is put into your graveyard, the Spinner's ability can search for it again!

The rest of the deck's creatures can do a little of everything. Stampeding Rhino and Vastwood Gorger are better at attacking. Giant Spider is better at blocking. Acidic Slime and Stingerfling Spider can take out an opposing permanent when they show up, then stick around to fight. Based on what your opponent has, you may want to attack witheverything you've got, play defense until you gain a creature advantage (or draw Overrun!), or send in just one big monster while the rest of your forces keep you safe.

If you enjoy playing this deck, a perfect addition is Garruk, Primal Hunter. He makes 3/3 Beasts, 7/7 Wurms, and rewards you for having high-powered creatures. Skinshifter is another dynamite choice, since it can transition between off ense and defense depending on what you need at the time