he Magic 2013 Event Decks are coming! And here's more specific information about what they will contain! 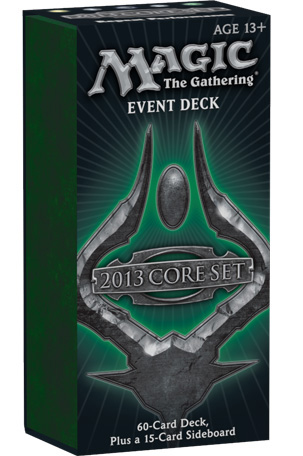 This deck is all about creatures, creatures, and more creatures. In fact the only two cards in your deck that aren't creatures or lands are sorceries that get creature cards out of your library! Most have enters-the-battlefield abilities that trigger spell-like effects, making the most of your resources. At the center of the fray is Roaring Primadox, a heavy-hitting 4/4 that causes you to pick up one of your creatures during your upkeep so that you can cast it again later in the turn.

On the first turn of the game, you want to cast Arbor Elf, Llanowar Elves, or Avacyn's Pilgrim. If you don't have one of those cards in your opening hand, you might want to mulligan. Having one of those creatures on the battlefield gives you the extra mana you need to get all of your other creatures onto the battlefield one turn sooner. Attended Knight and Blade Splicer each bring along a creature token when they enter the battlefield, and it's really bad news for your opponent when they come out on turn two.

From the third turn on, you should be attacking with a steady stream of creatures. Even Borderland Ranger is no slouch as an attacker, and the land it fetches from your library makes it relatively easy to curve into your four- and five-mana monsters. The biggest threat in your deck is Geist-Honored Monk, a creature with vigilance whose power and toughness are each equal to the number of creatures you control—and it brings two tokens with flying along with it. In a deck that's practically all creatures, Geist-Honored Monk can be game over.

Cast Lead the Stampede whenever you don't have any creatures you're excited to cast right now. It lets you look at the top five cards of your library and keep any creature cards you find there. You'll average close to three creatures each time you cast it. Green Sun's Zenith is a more precise tool; save it until you know exactly which creature you need to make life difficult for your opponent.

If your opponent has a lot of spot removal for your creatures, bring Cloudshift in from your sideboard after the first game. It's an inexpensive way to dodge the kill spell while also getting another use out of your creature's enter-the-battlefield ability. If you need to deal with enchantments, War Priest of Thune is a great choice, but Oblivion Ring gets the job done if you also need to deal with artifacts, planeswalkers, or particularly scary creatures. Kemba's Skyguard and Dismember solidify your defenses against aggressive decks.

When you're ready to customize your deck, start by deciding what your focus will be. Do you want to attack early and often with efficient creatures? Wolfir Silverheart from the Avacyn Restored set can turn any of your creatures into a game-winning threat. Do you want to have all the answers in your Primadox-powered toolbox? Look for the planeswalker Garruk Relentless in the Innistrad set. One of his abilities lets you sacrifice a creature to search your library for a creature card and put it into your hand. 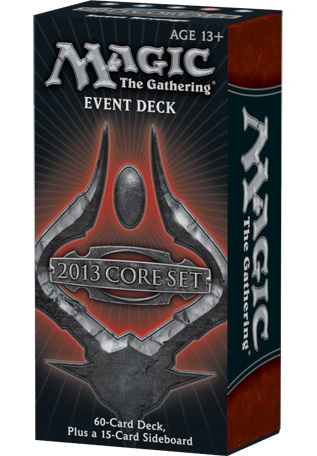 The key card in this deck is Burning Vengeance, a

enchantment with the ability "Whenever you cast a spell from your graveyard, Burning Vengeance deals 2 damage to target creature or player." Are you scratching your head? Now count how many cards with the flashback ability are in the deck. And check out how many of your spells deal damage on their own, too. With spells like these, who needs the combat phase?

You'll need to approach the game in two stages. During the first stage, you'll play defense, fill your graveyard with goodies, hit your land drops, and get a Burning Vengeance or two onto the battlefield. During the second stage, you'll take over the game. Start casting those flashback spells from your graveyard, and kill anything that moves. If there's nothing in front of you but scorched earth, point your Burning Vengeance triggers straight at your opponent.

Fettergeist is a great attacker, but leave it back to block if your opponent has anything to attack with. Preserving your life total during the early game is a top priority. Armored Skaab pulls double duty in this deck, serving as a tough blocker while also dumping some cards into your graveyard. Both of these creatures have 4 toughness, which allows them to survive Slagstorm when you cast it to clear the board. Geistflame, Pillar of Flame, and Silent Departure are all efficient ways to deal with individual threats. Firewing Phoenix is your backup plan if you must resort to attacking for the win.

Putting cards into your own graveyard with Forbidden Alchemy and Armored Skaab may feel counterproductive at first, but so many of your cards can be cast from your graveyard that it's almost like you're putting them into your hand. Cast Think Twice and Desperate Ravings from your hand early on to find more lands to play and more removal to defend yourself with. But hold off on casting them from your graveyard until you have Burning Vengeance on the battlefield.

Sideboarding with this deck is straightforward. Do you need to kill more things early on? Bring in Dismember and Arc Trail. Is your opponent also playing a control deck with lots of card drawing and answers and just a few threats? Turn the tables and bring in Screeching Skaab, Bloodcrazed Neonate, and Secrets of the Dead to apply constant pressure. Swap these cards in for your main-deck removal, which is unlikely to be useful in that matchup.

If you're looking to make the deck even more controlling, the Magic 2013 card Magmaquake can deal with creatures and planeswalkers at the same time. Thundermaw Hellkite is a hasty Dragon that hits like a truck. It could give the deck a different, more proactive angle of attack that mixes well with the Burning Vengeance game plan. If you like everything about the deck but want to try winning with something besides Burning Vengeance, take a look at Talrand, Sky Summoner. With this legendary blue creature, every instant and sorcery you cast comes with a 2/2 flying Drake token.