Magic 2014—Duels of the Planeswalker Expansion! 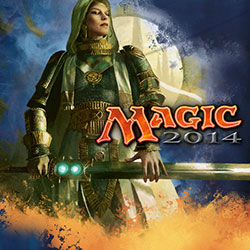 oming in September, the first expansion for Magic 2014—Duels of the Planeswalkers! It will begin rolling out across platforms on September 18, 2013, and will become available depending on platform and region after that.

Let your spark grow into a raging wildfire! Explore new planes and fight new enemies with the Magic 2014—Duels of the Planeswalkers expansion, featuring additional campaign levels, decks, and challenges.

Further planar travel leads you into conflict with another Planeswalker, Elspeth Tirel. She is a weary knight searching for a safe haven, but she is still a powerful force to be reckoned with. Defeat her to continue your quest for the magical force you need to prolong your life.

The Magic 2014 Expansion adds many hours of new gameplay: