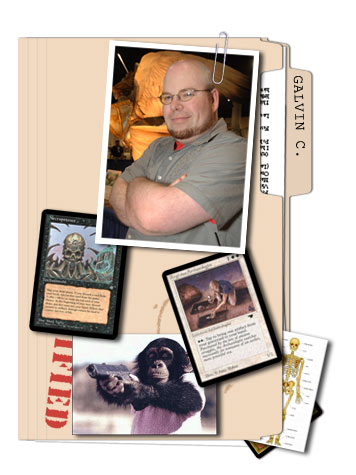 I run the Organized Play group as well as the E-commerce and Game Support group. The former group operates the DCI, the RPGA, the Wizards presence at conventions like Gen Con, and pretty much every event, fan club, and gathering of game players that we do. The latter group manages our call center, our online help center, and all the friendly people who help you out on Magic Online.

Previous jobs:
Inventory manager at a warehouse
Research assistant for an economics professor (worst job ever)
Gopher in a museum (best job ever)
I tried to sell Lady Kenmores at Sears, but that didn't work out so well

How you got your job here: Guile and trickery. Back in the ancient days of Magic, a college buddy of mine became one of the early business managers of Magic. At that time, the idea of the DCI and the Pro Tour were just getting started. He needed help from somebody who a) was a gamer, and b) understood how to run events. I fit the profile and was willing to pull up stakes and move to Seattle.

Previous responsibilities within the company: Plan events, run events, get other people to plan events and run events. Figure out what things cost. Wrassle Magic Online to the ground on a daily or weekly basis.

Magic playing accomplishments: For the longest time, I couldn't understand why people were so excited about Necropotence. I guess that's why I became an event organizer instead of a pro player.

Favorite part of your job: Traveling all over the planet

Least favorite part of your job: Traveling all over the planet

Favorite Magic card(s): I thought Argivian Archaeologist was pretty cool at the time. I'm not quite sure what I was thinking.

In your spare time: Reading, watching sports (esp. college basketball and baseball), watching movies, snowboarding, working out less than I ought to

Something the readers don't know about you: I can name all 206 bones in the human body.