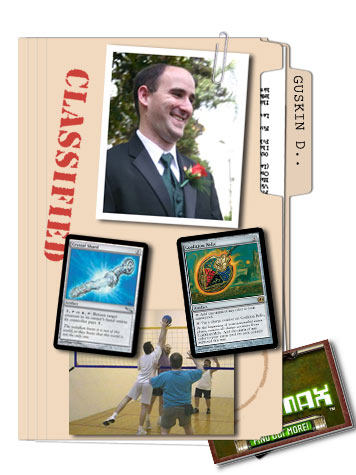 Job Title and Duties: I'm a web developer, meaning I work on the code and structure behind portions of the Wizards website. I'm currently assigned as a developer supporting the magicthegathering.com live site and ongoing work adding to and maintaining it.

Family: It's just me here in Seattle, but I have a sister in San Francisco, CA and a mom and dad in Austin, TX. Hi guys!

Outside of a few elective college courses, most of my programming knowledge is self-taught!

Began working at Wizards: Since June 2007.

Previous Job(s): Most recent were web / game programming jobs, in the casual games space in Los Angeles, but before that I worked as a research scientist for the government in Boston and spent a short stint there as a picture framer as well!

How you got your job here: For many years, ever since my re-integration into the Magic scene with the introduction of Magic Online, I applied for every position advertised on the website – Great Designer Search, novel writer, creative team, development intern and of course, website programmer. I finally received a series of interviews when a position came up that matched my web community and multi-language programming experience almost exactly.

Previous Responsibilities within the Company: Previously I have done development work supporting the forums and future as-yet-unreleased projects, including features related to the Gleemax social networking website, and various brands including Wizards' many (non-game) book lines.

Magic playing accomplishments: I qualified for PT Geneva and attended, going 3-3 and barely missing Day 2 when I fell to former GP winner Guillame Cardin's excellent RG deck in round 6. Other than that PTQ win, I've had many PTQ Top 8s in San Diego and the Boston area, and a few X-2 "one win short" finishes at GPs along the eastern U.S. seaboard.

Expansions or projects you've worked on: I submitted a few hole designs for "Rock," the Fall 2008 expansion, which appear to be testing and playing well thus far! I'm pretty excited about those, but I unfortunately can't talk about them quite yet. :-)

Favorite part of your job: For a long time, or as far as I understand it, the web development team was stretched very thin, with few people to take on large and numerous projects. One thing I've loved about my time here so far is that our team has grown significantly but remained a tight unit, with everyone contributing opinions, thoughts and knowledge in a constructive way. Having that team to support me when I need a sanity check or help with a specific kind of programming problem works wonders for getting things done.

Least favorite part of your job: The not-so-fun part is working on two very different kind of projects: the kind that needs attention as soon as possible, like being on constant alert for a "drop everything emergency" (the live server support is like this) and the kind that is planned out as a project in stages with well-defined tasks known weeks in advance (future feature projects in development are like this). Juggling commitments to these two kinds of projects so that everything actually gets done often wears me out!

Thing you've worked on that you're most proud of: I'm very proud of some mostly structural upgrades I've made to our forums, including the integration with Gleemax single sign-on. They're nuts-and-bolts but very important, and will make future integration with features coming up for the community a cinch. I'm also proud of my work on wikis for our social networking projects, both internally and for future launch.

Other games you currently enjoy playing: I have a weekly gaming group with some Wizards folks and our outside-of-work friends, and we tend to do one- or multi-shot RPG sessions using wacky rules systems (Paranoia, Unknown Armies, Serenity, Continuum, etc.). My favorite thus far was a Serenity adventure where we were the crew (I was Wash) and we played out a "previously unaired" episode of the show. It was amazingly well run and played. Other than that, I've been playing some video games (Rock Band, Bioshock, Portal, Assassin's Creed) and various board games (Kill Doctor Lucky, Fluxx, Caylus, Puerto Rico, etc.) when I have the time and people to play with.

Favorite Magic card(s): I love Crystal Shard from Mirrodin; reusing my comes-into-play guys is always awesome and the card's flavor text was a slam dunk for me. Other favorites include Gifts Ungiven (genius design), Coalition Relic (I'm so greedy), Rorix Bladewing (RAWR) and Yet Another Aether Vortex (sooo crazy).

In your spare time: I do some hobby web programming on the side and play this intense indoor sport called Wallyball on weekends. Also I'm getting a beagle puppy (awwwooooo) which will soon be ALL of my spare time.

Something the readers don't know about me: When I lived in Boston (after I left school in New York), my roommate Mick decided he wanted to take a course to learn how to bartend. I joined him and learned how to mix drinks with the best of them. I haven't yet done any work in a "real life" bar, but I often bartend for friends at parties at their request.