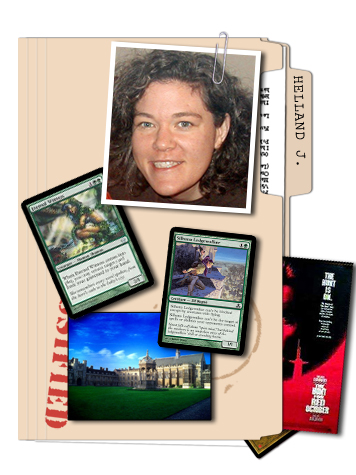 Job Title and Duties: Magic Creative Designer
I work on world building, card names and flavor text. More specifically, I was on the names/flavor team for Morningtide; I did work for the Shadowmoor anthology (see Doug's article today); I assisted Doug as Flavor Deputy for Eventide; and I was on the world-building team for "Rock." I also help proof text for grammatical accuracy.

Education:
B.A. in history from Trinity College, Dublin, Ireland.
M.A. in journalism from University of Missouri–Columbia

When did you start playing Magic? Tempest Block

Began working at Wizards: Has it been a year already? It went lightning fast.

How you got your job here: I was living in mid-Missouri and playing a lot games. I saw a job posting for writer/editor on the Wizards boards. I emailed a resume, interviewed, and got the job. The only hitch was the wall o' ice we ran into in Wyoming during our drive across the country.

Previous responsibilities within the company: I do editing and creative work for the Maple Story iTCG. I've also worked on Axis & Allies Miniatures.

Favorite part of your job: The folks at Wizards are the most interesting and intelligent collection of people I've spent time around. In my previous life, I was considered kind of odd. Not anymore. Well, at least not in a bad way.

Least favorite part of my job: Some guy around the office started calling me Jenemy. You know, "Jenna" + "enemy". Now everybody is doing it. I'm starting to get a complex . . .

Other games you currently enjoy playing: Mostly Magic. But I'm playing a lot of board games lately: RoboRally, Settlers of Catan, Hungry, Hungry Hippos. Sometimes we play D&D at lunch.

Favorite Magic card(s): Silhana Ledgewalker, Eternal Witness, and Masticore are the first three that jumped into my head.

In your spare time: Running, judo, and writing.

Something the readers don't know about you: I really like movies about submarines. As detailed extensively elsewhere, I really like lemurs. Now someone needs to make a movie about lemurs on a submarine. And not just in cages or as some glorified mascot. That'd be boring. Paws on the periscope. Launching torpedoes. Awesome.