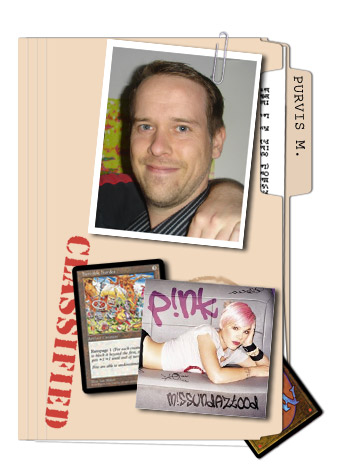 I learned to play Magic in the fall of 1993, and quickly fell in love with playing and collecting the game. Despite pouring many hours into playing Magic in college, I was able to graduate with a degree in Mass Communications, and was lucky enough to get a job working for Sony Music as a marketing rep. I spent the next 10 years of my life selling and marketing old-fashioned compact discs to places like Tower Records, Musicland, and Virgin Megastore.

When I was working at Sony Music, I moved from Ohio to San Diego, then to LA, and finally Chicago. Everywhere I went, I was able to find or create a community of Magic players, and I kept in touch with innovations to the game by reading magicthegathering.com and playing at Prereleases. 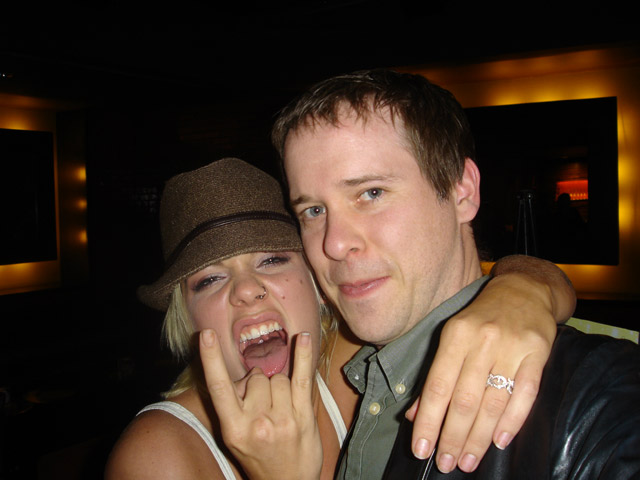 Working with rock superstar P!nk in 2007

Most people know how the internet has had an impact on the sales of recorded music, but 2006 was an especially tough year for the music biz. Tower Records declared bankruptcy, and a lot of great independent record stores closed down. Although I still loved music, watching so many of my friends lose their jobs made me a bit of a sad panda.

On March 12th, 2007, I was reading Mark Rosewater's article You Can Say That Again, and at the bottom he mentioned that the Magic Brand Manager was looking for someone to join the marketing team, "someone who straddles the world of Magic and the world of corporate business." (like me!)

My wife and I decided that maybe it was time to leave the glamour and excitement of the music industry to explore the glamour and excitement of the TCG industry. I applied online, and hardly 3 months later we had relocated from Chicago to Seattle to work at Wizards (my wife works in the finance department). And it's been great! Working at Wizards has been an incredible experience. 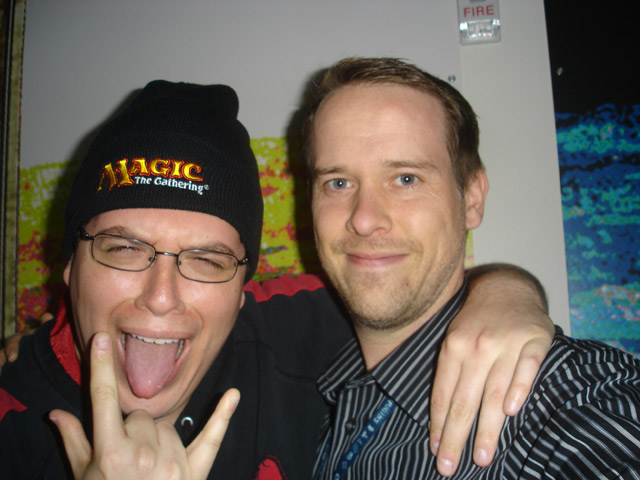 Favorite part of your job: One of the best things about my job is that every day is so completely different. The Brand team's primary function is to market Magic, but we interact with every part of the company that touches Magic and we work on every Magic release. In just the last month or so I've worked on the instructional videos for Shadowmoor, picked Eventide spoiler cards for the PR team, handed over packaging text for Shards of Alara to our production team, and written the sales solicitation and announcement for "From the Vault: Dragons."

Least favorite part of your job: Not being able to talk to anyone outside the company about Shards of Alara for the last 10 months. (It's awesome!)

Favorite Magic card(s): Horrible Hordes. I know it's not a 'good' card, but I love the artwork, the humor in the flavor text, and the utter ridiculousness of a 2/2 with rampage 1.

In your spare time: I don't have any spare time (I have two kids and love to play magic).

When I was living in Chicago, my friend Tom started a Magic group called "Monday Night Magic." MNM had 6-week 'seasons', and in the first week of each season every player would build a deck using the cards in 5 booster packs from the current block. In weeks 2 to 6, every player would be allowed to either open 1 pack to add to their deck, or 'reboot' with only 5 packs. We would then take our sealed decks and duel with anyone who could show up each Monday night, and after six weeks, Tom would tally up the win/loss records and the player with the best record would win a pack from each other player that season.

It turns out Monday was a great time for all of us to get together. Most of us had wives, kids or significant others that we would spend time with on the weekends. Mondays are usually such a bummer, but MNM always gave us something to look forward to at the beginning of the week. I forged some strong friendships at MNM, and practicing sealed every week had a big impact on our performance at sanctioned events like pre-releases.

I hadn't told anyone in my playgroup that I was interviewing at Wizards, but I accepted the job on the 6th Monday of a season of MNM. I was in the running for first place, so after winning the last game of the last match at the end of the night, I threw up my hands and declared myself "king of MNM". I also announced my retirement from MNM, leaving on a high note, George-Costanza style.

As a going-away present, my MNM group gave me this photo to remember them all by. I'm not sure if they're surprised and sad that I'm leaving, or if they're just remembering the whuppings I doled out that last season as this photo was snapped, but I prefer to think it's the latter. 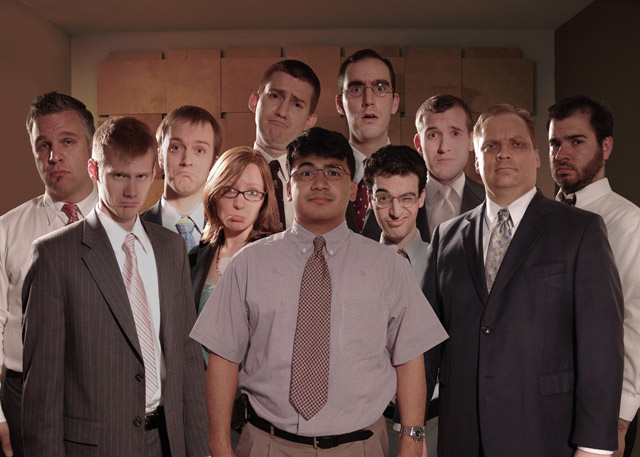 They still play MNM without me, but in my mind's eye they're all hunched over their cards, dressed in suits, with sad faces.

Thing you've worked on that you're most proud of: From the Vault: Dragons.

The product development team for "From the Vault" is like an all-star team of Wizards employees who are passionate about Magic. As a hard-core collector from way back, it was a privilege to be a part of that team and have input on such an exciting project.