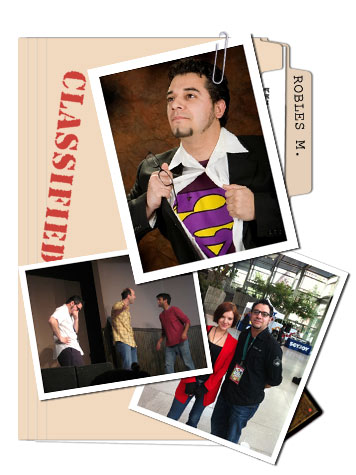 Job Title and Duties: Community Manager. I check out the forums, post on Facebook & Twitter (@wizards_magic) and go to conventions to talk with the fans. I also do some boring stuff, but no one wants to hear about that.

Family: My family is back in California where I'm from. Born and raised California boy!

Began working at Wizards: I started as a contractor in June 2010, and became full time in October. I'm just that awesome.

Previous job: I've had LOTS. I have a background in video game QA (working at WB Games & Zipper Entertainment here in WA) and before then I worked at Disneyland for over 5 years.

How you got your job here: Paul Levy wrote me a very nice letter of recommendation and I interviewed with Trevor Kidd & Michelle Brunes. I had a very fun interview and a little over a week later I got the job!

Favorite part of your job: Meeting everyone that loves the game. Whether I'm walking around working at a convention, or just talking on Twitter I've been very fortunate to meet people that love Wizards of the Coast & Magic: The Gathering. Walking around a convention can be very tiring, so when someone comes up to me and says they just want to tell me that they love the game, it makes me feel good. The same goes for my talks online. I really like talking in the forums & Facebook/Twitter to Magic fans.

Least favorite part of your job: Not being able to talk about future sets. THEY'RE SO GOOD!

Favorite Magic card(s): Anything from Legends. It was the first major Magic set I really got into and I tried to make a Kobold deck when I was younger. I was successful. Oh! And Nicol Bolas. Nicol Bolas, Planeswalker OR Nicol Bolas.

In your spare time: My spare time is filled with me trying to fill my spare time! I'm an improviser for Unexpected Productions as well as other improv groups including NERDprov. At the 2009 Emerald City ComiCon NERDprov got to perform with members of The Guild. It was fun times. Also, Video Games. Have an Xbox 360? Challenge me to a game: Microbless. I'm playing a lot of Marvel vs. Capcom 3, Call of Duty: Black Ops, and You Don't Know Jack!

Something the readers don't know about you: I used to work as background in TV/Movies. If you watch the opening scene of Tenacious D in The Pick of Destiny you can see me getting my fortune told before the opening credits!