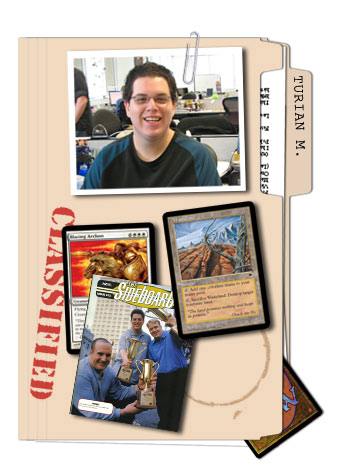 Family: I'm related to Nate Heiss. People mistake us for one another more often then you would think.

Began working at Wizards: I started as an intern right as we started work on Ravnica (September 2004). I was hired to a full time position in March of 2005.

Previous job: I would hate to call playing on the Pro Tour a job but that is how I paid my way through college.

How you got your job here: After I graduated from Pitt, I moved out to Seattle. I goofed around for three or four months. One day I went to lunch with Randy Buehler and he offered me the six-month intern position. After the internship ended, Randy offered me a developer position.

Responsibilities within the company: I spend most of my time doing development work and play testing Magic.

Expansions of projects you've worked on: I led the Future Sight and Morningtide development teams. I am currently leading the "Paper" development team. I have been on Guildpact, Coldsnap, Planar Chaos, Lorwyn, Tenth Edition, "Donut", and "Rock" teams. I have collated every Magic set since Guildpact. I have built a theme deck for every set since Ravnica. (My favorite is Slivers in Time Spiral.) I work with the Market Research department to gather feedback from Magic players. I work with Erik Lauer on MOL III, giving R&D feedback. I'll do occasional work on other Wizards of the Coast products, such as some design and play testing of the Goblin Game or play testing Axis and Allies and its expansions.

Favorite part of your job: Watching sets that I have worked so hard on being released.

Thing you've worked on that you're most proud of: Morningtide.

Other games you currently enjoy playing: I just went 4-0 in our in-house Dreamblade tournament! We play German board games every Tuesday evening. Currently we play Vegas Showdown, RA, Amun-Re, Saint Petersburg, Acquire and Settlers of Catan. For video games I love Warcraft 3(including a mod called Defense of the Ancients) and Starcraft.

Favorite Magic card(s): Wasteland. I have a 3-D Wasteland that was made for me. It is awesome! Second would be Blazing Archon. It was the first Magic card I designed. The original artwork for it hangs above my computer at my house. I originally submitted Blazing Archon as an 8-mana creature but it was changed to 9-mana because of another card I submitted at the same time, Grozoth! Grozoth needed more cards to fetch so Blazing Archon went up to 9-mana.

In your spare time: I read magicthegathering.com, starcitygames.com, gleemax.com, and other Magic related websites. I like watching reality shows like Survivor and dramas like Lost. I read a number of books. I'd recommend Yes Man, by Danny Wallace. Currently I am reading The Life and Times of the Thunderbolt Kid: A Memoir by Bill Bryson. I play poker on occasion. I just got engaged so I've been planning the wedding with my fiancée.

Something the readers don't know about you: I fight hard for things that I feel will make Magic a better game. An example would be I argued hard to get the watermarks onto the Ravnica guild cards.