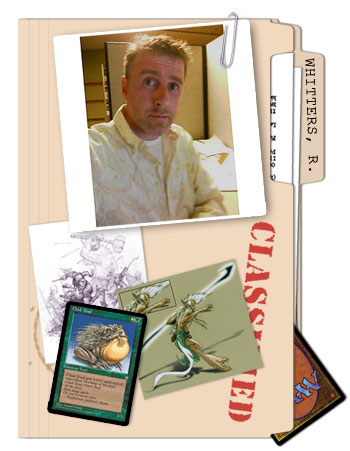 Job title and duties: Concept Artist for Magic the Gathering. It's my job to take random and crazy ideas and make them cool visually. My work day is basically two faceted, imagine and draw. I dig that.

Age: born in 1971 (The same year Canada separated from Mongolia)

Education: NBCCD Fredericton, New Brunswick, Canada. I took graphic design and illustration. During the same period I also learned most of my ninja/kung fu skills.

How you got your job here: I did a 24 hour pencil test for art director Jeremy Jarvis and then sent him sixty pounds of gold bullion, a case of back bacon and half a bottle of vodka and BOOM, I had the job.

Magic accomplishments prior to working here: I once bent a spoon with my mind but it made me pass out in my bowl of Rice Krispies. There is really nothing besides that.

Expansions or projects you've worked on: I've worked on the Jelly style guide and have done various random fantasy illustration work in the past.

Favorite part of your job: Hands down my favorite part thus far is drawing. I haven't had the luxury of drawing and making up ideas all day since college and I completely enjoy it.

Least favorite part of your job: There's this one guy who is about three feet tall and lives under my desk. That little fellow keeps pestering me to buy him stuff from the candy machine but I won't, I don't even know that guy! They tried to tell me he's just a figment of my imagination or a delusion, but what kind of delusion is named Rupert Hapsworthy the Third?

Thing you've worked on that you're most proud of: To date I have helped create one style guide and I thoroughly enjoyed the experience, even though I came in after the project was underway. I am looking forward to watching the next project develop from the ground up.

Other games you currently enjoy playing: I play D&D periodically as well as Starfarers of Catan, Balderdash, and on some occasions I've even played Magic. I also enjoy creating my own board and card games.

Favorite Magic card(s): The Chub Toad. Out of all Magic cards this guy is the coolest, he's just sitting there with his enemy in his mouth. He's like a cross between a Jedi and a … a big toad.