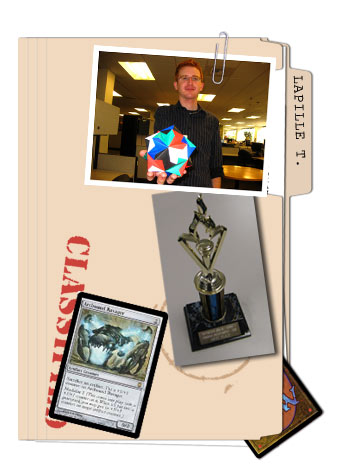 How you got your job here: I started playing Magic in 1997. I quickly developed some hero-worship for strong players like Mike Turian, Erik Lauer and Randy Buehler thanks to the now-defunct Magic website The Dojo. When some of those people began migrating to Wizards and working on Magic full time I dreamed of doing the same thing. Of course, I wasn't a pro like them and no one knew who I was, so that dream always seemed like a silly thing to chase. Instead, I continued leading a normal life with the intention of having a normal career while playing as much competitive Magic as I could squeeze in.

In the summer of 2007, I realized how much I didn't want the normal career I would begin in about a year and decided to turn the dream of working for Wizards into a reality. I created a Magic blog and wrote some articles for it, which won me the attention of the editors of Starcitygames.com. I wrote a column for that website that ran from December of 2007 until the summer of 2008. I used my column as a platform to gain the attention of people inside Wizards. I began a development internship in June of 2008, and am now a full time employee.

Expansions of projects you've worked on: I was on the development teams for Magic 2010 and From The Vault: Dragons, and I built the Intro Packs for Alara Reborn, Magic 2010, and Zendikar.

Least favorite part of your job: Not being able to play in competitive Magic tournaments. I'm slowly finding other things that hit the same notes for me, but it took a long time for me to get used to not battling for prizes and glory on a regular basis.

Thing you've worked on that you're most proud of: Magic 2010. The freedom to make new cards let us make the set as awesome as it could be without the constraints of the past. It's also my favorite core set for limited ever.

Other games you currently enjoy playing: I love Rock Band drums. I played orchestral percussion in high school, and it feels awesome to be hitting drums with sticks again. I also play Dominion every weekend online with my dad and some friends that I met through Magic. Finally, I'm having a blast in a Legend of the Five Rings RPG game that Kelly Digges invited me to join. That campaign is so awesome that between all of the players and the GM we've produced around fifty thousand words of fiction about it.

Favorite Magic card(s): Arcbound Ravager. If I could go back in time and add a single mana to the casting cost of only one card in Magic, this one would be it. However, Mirrodin Block Constructed was the format that made me a strong enough player to actually win Pro Tour Qualifiers and I have very fond memories of winning Ravager Affinity mirror matches in tournaments over and over despite people's claims that the mirror was random! If it weren't for Arcbound Ravager I don't know if I would have driven hundreds of miles to tournaments in the summer of 2004 and gained the experience that allowed me to be a strong player later.

I also recently began studying kenjutsu at a dojo in suburban Renton. I'm less than a month into it, but it's really fun and I'm noticing significant improvements in my mental focus, posture, and arm strength. I intend to earn my black belt by the end of 2012.

Something the readers don't know about you: I'm a vegetarian. In March I did a 30 day trial of a vegetarian diet because various friends had told me that they physically felt better all the time after switching. I had exactly the experienced they described during that month, and I decided to stick with it. That month also made me much more aware of how what I ate made me feel, and since then I've crept toward being vegan as I've eliminated things that don't make me feel good when I eat them. I feel so much better overall now, and I hope to never go back to the standard American diet.