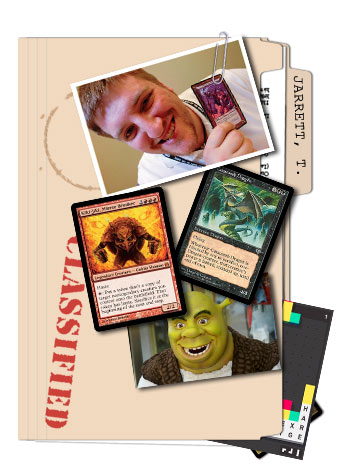 Job Title and Duties: Content Specialist. My primary duty is in overseeing and running DailyMTG.com, but my position is such that I am involved in a lot of processes from coordinating previews of new sets to being the content manager on projects.

Family: Married with dogs. Fun fact: Katie and I got married on 10/10/10, which aside from being an awesome date was also Mark Rosewater's 12th anniversary. Also, 101010 is binary for 42. Just want to make sure you all understand how cool that date was.

Began working at Wizards: My first day in the office was December 12, 2011. I'm pretty new around here and still get lost when I'm trying to find meeting rooms. The odd thing about my start date was that I only worked for two weeks before the offices closed for the winter break, closing between Christmas and New Years. I was actually getting cabin fever at home as I wanted to get back to work. Having only had two weeks to work, I was chomping at the bit to get back to work and do more!

How you got your job here: I was at Pro Tour Philadelphia when Wizards announced that Kelly Digges had been promoted and was vacating his position as Content Manager of DailyMTG.com. After talking it over with the wife, we decided for me to go for it and I applied. After interviews and a move across the country, here I am!

Magic playing accomplishments: Ha! Not much to report there. I'm a 29th-level Guildmage and I once went 3–0 at Georgia States when I was in college before realizing I was doing well and going on a 0–3 tear. That was before Planeswalker Points though, or else I would have stayed in and battled more.

I'm not what you might classify as a good player. I enjoy the experience of playing and the times when I do win, but I'm not cutthroat, nor am I analytical enough to really chase the competitive edge for victory. I play mostly Commander, and I draft from time to time. I say it jokingly, but in many ways, my Magic experience is rooted in that of a site runner. Sort of like that of players who are judges.

Favorite part of your job: I'm still new enough that the novelty of working inside Wizards hasn't worn off yet. But if I had to pick one aspect of my job which I love, it's brainstorming content and laying out a content plan for the upcoming months.

Other games you currently enjoy playing: Having recently acquired an iPhone (leaving behind the world of Android) I'm fairly heavily addicted to a number of iPhone games: Puzzlejuice being the biggest one (I might have gotten a fair number of other Wizards employees into it). Also I'm playing a lot of Ascension on the iPhone. My wife is beginning to explore new games, so we're playing things like Jambo and Pandemic.

Favorite Magic card(s): My first cardboard love was a pretty horrible black dragon from Mirage: Catacomb Dragon. I can't explain why I got stuck on it but I loved it. More recently, I've been enthralled with Kiki-Jiki, for his fun hijinks in Commander.

In your spare time: I do a lot of Internet-based fiddling. Like if this were the 1940s I would be the guy who goes out to his shed and works on making chairs or stools or the world's new best toothpick. A lot of these projects never see the light of day; they're just things for me or for me to use to learn. On top of that, I read a lot of books and watch a fair bit of TV.

Something the readers don't know about you: I grew up in Orlando, Florida—home of Disney World and Universal Studios. Where other cities might have teens doing paper routes or working in fast food restaurants, a sizable percentage of my friends worked in the theme parks, including me. Not only did I work as a ride attendant (the people who check your seatbelts for roller coasters, etc.) I was one of the characters in the park.

I was actually two characters: Shrek and The Hulk.

Then I broke the Hulk costume, but that's a story for another time.