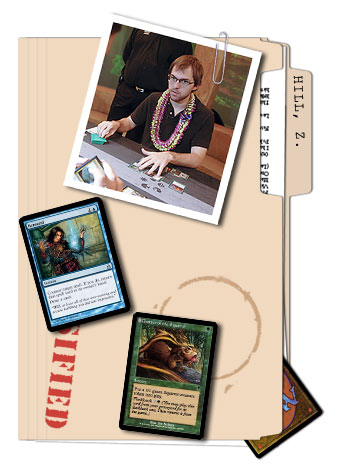 Education: BA, Political Science, Phi Beta Kappa: Rhodes College—I might be the only human being whose mascot has been a "Lynx" from first grade on through college.

So I spent my last year as a Luce Scholar, courtesy of a nationwide competition sponsored by the Henry Luce Foundation. This was totally totally totally ridiculously awesome for a large number of reasons, many of which involved food, but it also meant that for the first time ever in my life I wasn’t on a big massive intimidating expansive artificial "track." So while I was applying for law schools, grad schools, creative writing schools, etc., I said to myself, "This might be the only point where I can just try to do whatever I want without any cataclysmic consequences." It was insanely liberating, in a way. So I shot an email out to Aaron Forsythe saying, "Hey. You read my stuff right? Can I, um. Work at Wizards?" It’s possible I *might* have been more eloquent. But he was familiar with my work, asked to see a resume, and a few short months later I had landed the job. Yaus!

Favorite part of your job:

Least favorite part of your job:

Thing you've worked on that you're most proud of:

Other games you currently enjoy playing:

Dominion, Race to the Galaxy, TurboHearts.

In your spare time:

Something the readers don't know about you:

I basically bared all in my column, so. Secrets aren’t my forte. I was in line to play Dennis the Menace in that movie they released infinite years ago, but I lost my two front teeth and was thus out of contention for the final four or whatever. It might make people chuckle that for a solid five years of my life I was *convinced* that my purpose in life was to be a Presbyterian minister. Yet again, that, um. Changed.