ay back in 1995, the fourth issue of The Duelist published an article by Mark Rosewater showing how to play a solitaire version of Magic. It looked like this! 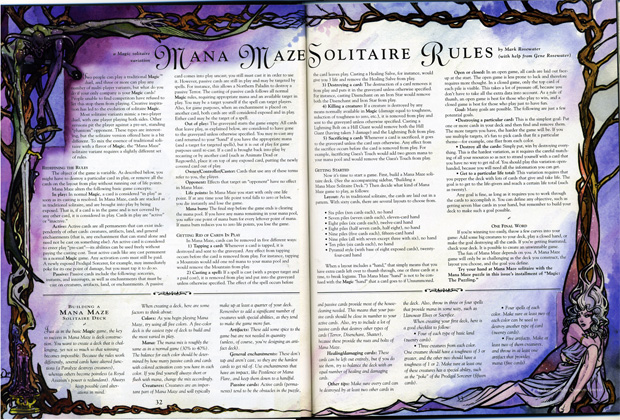 That's probably a little small to read, so here's a more Internetty version of the rules.

by Mark Rosewater (with help from Gene Rosewater)

wo people can play a traditional Magic duel, and three or more can play any number of multi-player variants, but what do you do if your only company is your Magic cards? People unable to find competitors have refused to let this stop them from playing. Creative inspiration has led to the evolution of solitaire Magic.

Most solitaire variants mimic a two-player duel, with one player playing both sides. Other versions pit the player against a pre-set, standing "phantom" opponent. These types are interesting, but the solitaire version offered here is a bit different. To mix the essence of traditional solitaire with a flavor of Magic, the "Mana Maze" solitaire variant requires a slightly different set of rules.

The object of the game is variable. As described below, you might have to destroy a particular card in play, or remove all the cards in the layout from play without running out of life points.

In Play: In normal Magic, a card is considered "in play" as soon as its casting is resolved. In Mana Maze, cards are stacked as in traditional solitaire, and are brought into play by being exposed. That is, if a card is in the game and is not covered by any other card, it is considered in play. Cards in play are "active" or "inactive".

Active: Active cards are all permanents that can exist independently of other cards: creatures, artifacts, land, and general enchantments (that is, any enchantment can stand alone and need not be cast on something else). An active card is considered to enter play "pre-cast" - its abilities can be used freely without paying the casting cost. Treat active cards like any cast permanent in a normal Magic game. Any activation costs must still be paid. A newly exposed Prodigal Sorcerer, for example, may immediately poke for its one point of damage, but you must tap it to do so.

Passive: Passive cards include the following: sorceries, instants, and interrupts, as well as enchantments that must be cast on creatures, artifacts, land or enchantments. A passive card comes into play uncast; you still must cast it in order to use it. However, passive cards are still in play and may be targeted by spells. For instance, this allows a Northern Paladin to destroy a passive Terror. The casting of passive cards follows all normal Magic rules, requiring appropriate mana and an available target in play. You may be a target yourself if the spell can target players. Also, for game purposes, when an enchantment is placed on another card, both cards are still considered exposed and in play. Either card may be the target of a spell.

Out of Play: The graveyard starts the game empty. All cards that leave play, as explained below, are considered to have gone to the graveyard unless otherwise specified. You may re-cast any card returned to your "hand" if you have the appropriate mana (and a target for targeted spells), but it is out of play for game purposes until re-cast. If a card is brought back into play by recasting or by another card (such as Animate Dead or Regrowth), place it on top of any exposed card, putting the newly covered card out of play.

Owner/Controller/Caster: Cards that use any of these terms refer to you, the player.

Opponent: Effects that target an "opponent" have no effect in Mana Maze.

Life Points: In Mana Maze you start with only one life point. If at any time your life point total falls to zero or below you die instantly and lose the game.

Mana Burn: The final step before the game ends is clearing the mana pool. If you have any mana remaining in your mana pool, you suffer one point of mana burn for every leftover point of mana. If mana burn reduces you to zero life points, you lose the game.

Getting Rid of Cards In Play

In Mana Maze, cards can be removed in five different ways:

Now it's time to start a game. First, build a Mana Maze solitaire deck, then decide what kind of Mana Maze game to play, as follows:

Layout: As in traditional solitaire, the cards are laid out in a pattern. With sixty cards, there are several layouts to choose from.

When a layout includes a "hand", that simply means that you have extra cards left over to thumb through, one or three cards at a time, to break logjams. This Mana Maze "hand" is not to be confused with the Magic "hand" that a card goes to if Unsummoned.

Open Or Closed: In an open game, all cards are laid out face-up at the start. The open game is less prone to luck and therefore requires more thought. In a closed game, only the top card of each pile is visible. This takes a lot of pressure off, because you don't have to take all the extra data into account.

Goal: Many goals are possible. The following are just a few potential goals.

Any goal is fine, as long as it requires you to work through the cards to accomplish it. You can define any objective, such as getting seven blue cards in your hand, but remember to build your deck to make such a goal possible.

If you're winning too easily, throw a few curves into your game: Add some big creatures to your deck, play a closed hand, or make the goal destroying all the cards. If you're getting frustrated, check your deck. It is possible to create an unwinnable game.

The fun of Mana Maze depends on you. A Mana Maze game will only be as challenging as the deck you construct, the layout you choose, and the goal you define.

Just as in the basic Magic game, the key to success in Mana Maze is deck construction. You want to create a deck that is challenging, yet not so much that winning becomes impossible. Because the rules work differently, several cards have altered functions (a Paralyze destroys creatures) whereas others become pointless (a Royal Assassin's power is redundant). Always keep possible card interactions in mind.

When creating a deck, here are some factors to think about:

Colors: As you begin playing Mana Maze, try using all five colors. A five-color deck is the easiest type of deck to build and the most varied in play.

Mana: The mana mix is roughly the same as in a normal game (30% to 40%). The balance for each color should be determined by how many passive cards and cards with colored activation costs you have in each color. If you find yourself always short or flush with mana, change the mix accordingly.

Creatures: Creatures are an important part of Mana Maze and will typically make up at least a quarter of your deck. Remember to add a significant number of creatures with special abilities, as they tend to make the game more fun.

Artifacts: These add some spice to the game but are not needed in quantity.

General Enchantments: These don't tap and aren't cast, so they are the hardest cards to get rid of. Use enchantments that have an impact, and keep them down to a handful.

Healing/Damaging Cards: These cards can be left out entirely, but if you do use them, try to balance the deck with an equal number of healing and damaging cards.

Other Tips: Make sure every card can be destroyed by at least two other cards in the deck. Also, throw in three or four spells that provide mana in some way, such as Llanowar Elves or Sacrifice.

When creating your first deck, here is a good checklist to follow:

Okay! That's all the time we have for today, but tomorrow, we're going to dip into Duelist #4 again, because Mark created a puzzle based on the Mana Maze Solitaire rules. See you tomorrow with that!