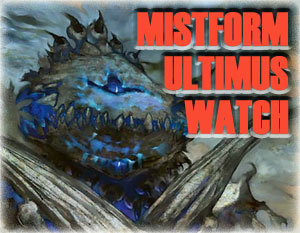 again to Mistform Ultimus Watch! In this recurring sub-feature of Magic Arcana we keep track of everybody's favorite legendary illusion (and bane of trivia enthusiasts everywhere) to see what creature types it has gained and/or lost.

We last checked in with the Ultimus after the release of Coldsnap. Since then, Time Spiral and its associated set of timeshifted cards have released. Although those hourglass-marked cards are themed around Magic’s past, Mistform Ultimus has picked up an interesting set of new types.

Mistform Ultimus has lost these types:

So Mistform Ultimus is now a Lemure Construct, a Shyft Preacher, a Splinter Being, a Chicken Bringer, a Sliver King, a Nightmare Lurker, a Kor Spawn, and a Ninja Spy Horse Exorcist.

All together, as of Time Spiral, Mistform Ultimus is a: