Topology jokes aside, people in the forums rushed to create their own sponges. Special credit goes to FolkenFanel42, KingPoo, and Ezra from New York for creating Level 2 Sponges:

Sadly, FolkenFanel42's sponge is no more, because it was used as a piñata. It's a good thing it was, in fact, filled with delicious candy!

Here at the office, Monty Ashley was idly making a Level One Menger Sponge (with the card backs facing out, and a cube of rares imprisoned in the middle), when he decided he was actually more interested in the Level Zero part. The cubes, he decided, could interlock to create almost anything. So why not build something besides a sponge? 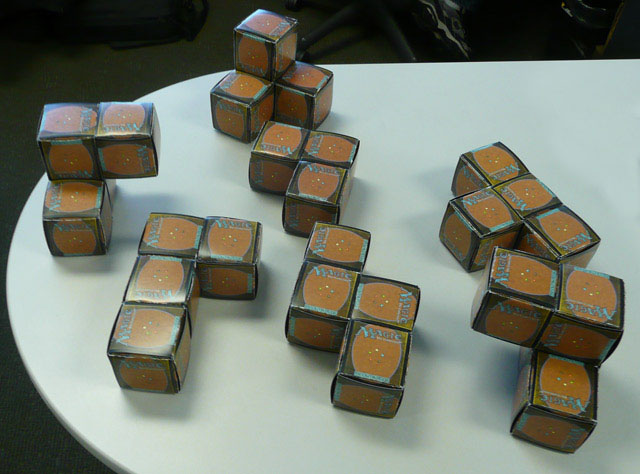 Soma cubes are essentially a building block puzzle, which can be assembled to create a wide variety of shapes. Here are some of the shapes that have been visible on Monty's desk, including the inevitable 3X3X3 Cube, made from Soma Cubes, made from cubes, made from Magic cards:

Note that the faces have all been "capped", with a card added on the outside to hide the unsightly flaps. This added to the stability of the shapes, and also made the final product much more handsome.

Next, Monty's thinking of trying to construct sculptures made of Menger Cubes. It seems like Mario would look good, since he's already pixelated. Of course, that will involve making cubes of specific colors to match each pixel...