A Mutant Vedalken in Ravnica

emember the Vedalken from Mirrodin block? The four-armed water-breathing guys? To refresh your memory, the Vedalken Mastermind looked like this: 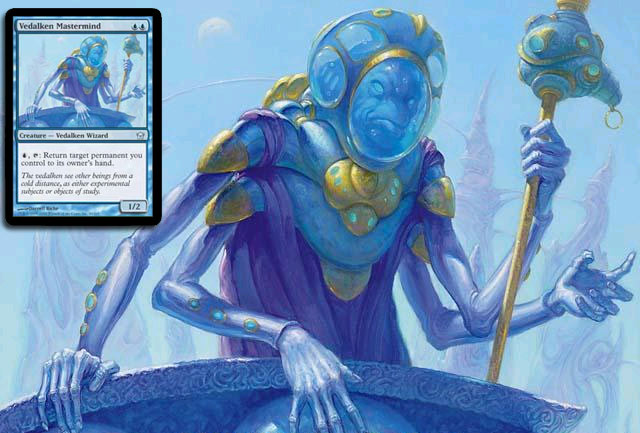 That helmet on his head is kind of a reverse-SCUBA, allowing him to venture out of the briny deep and cause trouble on land.

The Simic on the plane of Ravnica aren't like that. Oh, they share the same dispassionate view toward life, but they're clearly lacking in the gill department, besides being shortchanged to the tune of two arms. But (as we covered in the Simic section of the Dissension minisite) Momir Vig "believes the key to evolving life on Ravnica is to 'design' it for the city." And that brings us to a Simic Vedalken who has been mutated by science gone mad! 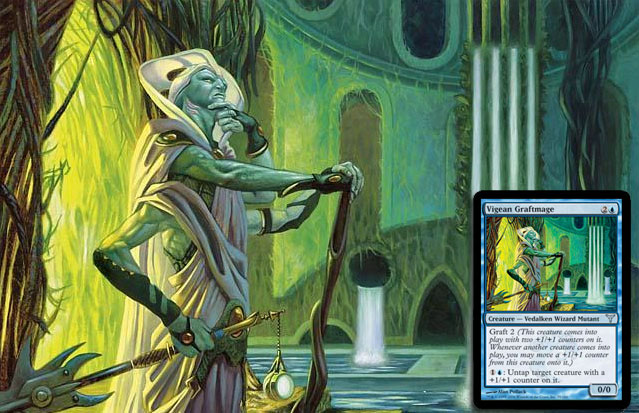 Color: Green/Blue guild
Location: your choice
Action: Show a Vedalken wizard who has been "improved" by the Simic -- so that now he has gill slits on his neck, and he has four arms. He wears long robes with a high collar of some pearly material and is now a G/U Vedalken
Focus: the four-armed Vedalken wizard
Mood: cold, superior

The Vigean Graftmage has been given two extra arms for easier cytoplasm-meddling. He's got gills so he can more easily work underwater where the complicated gene-splicing takes place. On Mirrodin, it was the spore, a strange vapor created by the mycosynth, which caused accelerated evolution and mutation. On Ravnica, it was Simic biomancy. Why would two totally distinct kinds of magic yield the same four-armed, gilled result when applied to the Vedalken? The story is silent on the subject.