he New Phyrexia Event Decks will be available for sale in English, French, German, Italian, and Japanese on June 10, 2011 for $24.99. Unlike Intro Packs, which are for fairly new players, these are designed to let you enter the world of tournament play knowing you've got a powerful deck that will let you be immediately competitive. 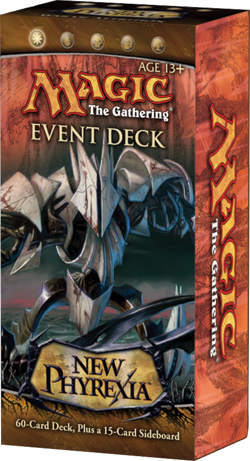 The "War of Attrition" deck combines efficient, aggressive creatures with versatile Equipment, including several with living weapon, to overwhelm your opponent with an unrelenting stream of threats. From the very first turn, smaller creatures like Elite Vanguard and Kor Duelist put you in the driver's seat. Then cards like Flayer Husk and Sickleslicer help you add pressure without exposing yourself to removal—if your opponent has a kill spell, the Equipment sticks around!

Even though your deck is fast, it's important not to overextend your forces on the battlefield. Most games will be a marathon, not a sprint. Slower opposing decks use mass removal spells like Day of Judgment and Pyroclasm to wipe the battlefield clean and erase any advantage you may have had. You can prepare for this by holding a creature or two in your hand, especially if it looks like your opponent isn't doing anything—after all, with your powerful Equipment, any creature can become lethal in a heartbeat. Against other creature-based decks, try and trade your Germ tokens for the creatures they cast, and then suit up your survivors after the way is clear. You only have a few cards that directly deal with opposing threats, like Journey to Nowhere or Leonin Relic-Warder, so make sure it counts when you decide to pull the trigger.

Your sideboard is largely packed with answers to specific opposing threats: Revoke Existence for artifact-based strategies, Celestial Purge for red or black decks, and so on. However, with this deck, it's important not to get carried away and bring in too many answers—if you do, you won't have enough threats left to defeat your opponent in a reasonable amount of time! Still, the right card at the right time can completely swing some matchups in your favor. Kor Firewalker can single-handedly shut down a monored strategy. The extra copies of the fragile-but-powerful Kor Duelist, meanwhile, help you "race" combination decks that ignore your creatures in favor of executing their own plans.

Tailoring the deck involves balancing personal preferences and responding to what your opponents are playing. If green and black decks are popular in your area, more cards like Mirran Crusader and Sword of Feast and Famine can shut your opponents down completely, rendering your creatures unblockable and invulnerable. Alternatively, for aggression against a wide-open field, Hero of Bladehold brings its own army and allows your attacking creatures to enjoy a boost in power. 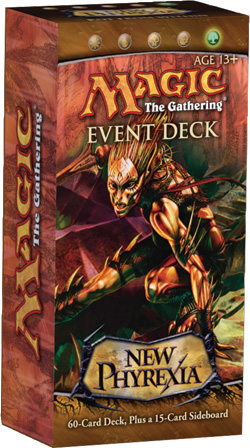 The "Rot from Within" deck combines features of aggressive decks and combo decks into a winning package. It can come out of nowhere, delivering a lethal ten poison counters to a hapless opponent before he or she even knows what's going on. Inexpensive creatures like Glistener Elf and Ichorclaw Myr can sneak in a point or two of damage early, then rise to enormity thanks to cards like Groundswell, Primal Bellow, and Mutagenic Growth.

Some creature-based decks play out the same way every game, putting their threats on the table and attacking until the opponent is defeated. This deck, however, requires you to be more subtle. Your strategies may change based on your opening hand. Sometimes you'll have Glistener Elf on the first turn, two Groundswells in hand, and it's full speed ahead toward a turn-three victory. Other times you'll need to be more patient, waiting for your opponent to tap out and striking after a surprise Carrion Call. Still other games will see you doing basically nothing at all—until you're running over your opponent, tapped out or not, with a single Putrefax. Boosted by a Primal Bellow or two, it can easily deliver a lethal dose of poison counters!

Your power-pumping spells are one of your deck's greatest strengths, but your opponents may see it as a weakness. If your opponents are using their sideboards to make sure you don't have any creatures to pump up, bring in Trigon of Infestation to make sure you never run out of gas. Other decks may try to slow down your momentum with wave after wave of blockers. Between your Contagion Clasp and Unnatural Predation, however, you should be able to either get those blockers out of the way or trample over the top for lethal damage in spite of their best defensive eff orts. The rest of your sideboard consists of specific answers to specific problems— including Melira, Sylvok Outcast, just in case your opponent also has poison in mind!

While this version of the infect deck tries to be as explosive as possible, there are other ways to go about building it. Stocking up on Inkmoth Nexus as your primary win condition allows you to perhaps dip into black and fill your deck with more removal spells. Alternatively, embracing black could lead you to more powerful creatures with infect like Phyrexian Crusader, Phyrexian Vatmother, and Hand of the Praetors.