During Kamigawa's war with its own kami, the black-aligned nezumi mostly looked out for their own interests. They lived in Takenuma Swamp among the rotten bamboo, scavenging shabby equipment from the swamp or stealing goods from travelers. They favor Kusari-Gama, such as this burly fellow.

The nezumi were greedy, treacherous opportunists, mercenaries and thieves -- often involved in deals with other races who needed to get the nastiest sorts of jobs done.

The nezumi were also talented shamans (check out the great shamanic details here -- the fish strapped to his thigh armor and the lizard hanging from his staff)...

...and in some cases, worked their way up from common graverobbers to legendary necromancers. 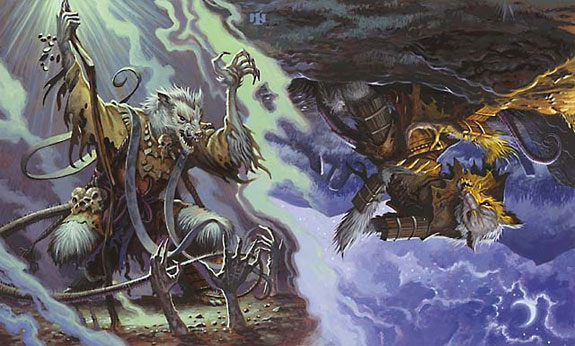