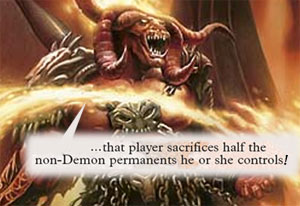 issension's Rakdos the Defiler (previewed in today's feature article by Rei Nakazawa) causes players to sacrifice "non-Demon" permanents. While references to "Goblin Taskmaster" and "Gempalm Strider" and "Takeno, Samurai General" have been relatively common in Magic, use of the "non-" prefix, specifying everything that isn't a member of a subtype, has been much rarer.

Most of the references to "non-" are on older cards that specified "non-Wall creatures" before the defender keyword was created to mean "this creature can't attack." Nettling Imp, Siren's Call and Aggression gain some flavor by specifying "non-Wall" -- it wouldn't do to have your Wall of Stone die because it couldn't heed the Norritt or got in a fight with a Basilisk, right?

Mirage's Catacomb Dragon is a cool early example of a card that specifies "non-Dragons" -- anything that gets in a tussle with it that isn't a dragon or artifact creature gets so freaked out that its power is cut in half.

Rakdos the Defiler is the only card that refers to "non-Demons", but Kamigawa Block has its share of tribally-aware demons and spirits. When Yukora the Prisoner dies, he takes all your non-Ogres with him. Harbinger of Spring has protection from non-Spirits, and Rend Flesh rends, well, any fleshy creatures, i.e. non-Spirits.

Most recently, the introduction of the Aura subtype to replace "local enchantments" has caused Oracle rewording of the term "global". For example, Opalescence and Tranquil Domain now refer to "non-Aura enchantments". But we suggest, when you head to the prerelease, that you keep track of non-Demons first...