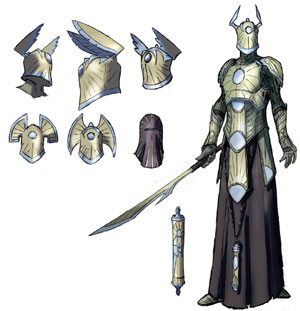 ike any organization of hierarchical power, the Orzhov Syndicate has its enforcers. These Orzhov soldiers are there as a show of force as much as for actual face-pounding -- a symbol of the Orzhov's everpresent rule.

As you can see in the style guide image to the right (concept illustration by D. Alexander Gregory), the typical Orzhov soldier has dark and light elements in its armor, and a stylized sun symbol to reflect the Orzhov signet.

There are several cards in Guildpact that show this typical Orzhov enforcer style in the art. Check it out:

Stay tuned for more on the look, feel and philosophy of the Orzhov Guild during Orzhov Week!