ast week, Penny Arcade unveiled some of the pins that will be for trade at this year's upcoming PAX Prime here in Seattle, WA, happening August 30, 2013 to September 2, 2013. Yesterday they announced their third-party pin lineup and check out who's first in line! Elspeth! 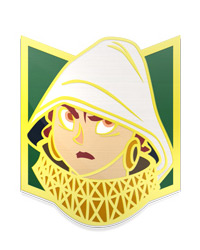 That's Elspeth! She will be our third exclusive Magic pin available to the PAX crowds. To get her, you'll need to come by the Magic: The Gathering booth and demo Magic 2014—Duels of the Planeswalkers. She's only available while supplies last!

We'll have more information soon about what's happening at PAX and what you need to know about attending our PAX Event—something we've done every year, growing it into one of the awesome events of every year's PAX.