et's talk playtest cards! We've got a big pile here marked "For use in future Arcana," and since a flying car just went by, that must mean the future is now! 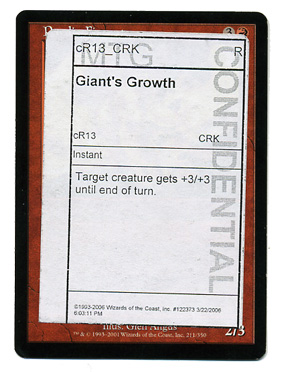 That's from the playtesting of Planar Chaos, which was codenamed "Crackle" (hence the "CRK"). It got printed as Brute Force, but the name during playtesting was "Giant's Growth." This obviously wasn't going to be the printed name, since it was too close to the original Giant Growth, but it does a good job of recasting it as a red card. There are, after all, red Giants! 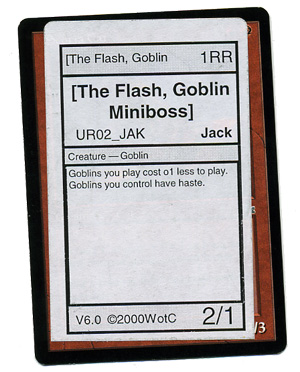 This card, according to the copyright symbol, is ten years old! And except for its name and its toughness, it got printed as-is in the form of Goblin Warchief. Well, except that "Goblins" had to be changed to "Goblin creatures." 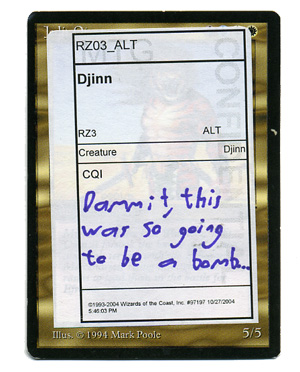 This card, however, didn't make it at all. "CQI" stands for "Continuous Quality Improvement" and is R&D lingo for "Someone come up with something for this card." It's from the Guildpact file ("ALT"), but there doesn't appear to be a Djinn that made it to the final version. (UPDATE: Well, except for Djinn Illuminatus, which we forgot about. So maybe this card turned into that!) Incidentally, this card appears to have been stickered on a Jedit Ojanen card from Legends, which seems crazy. 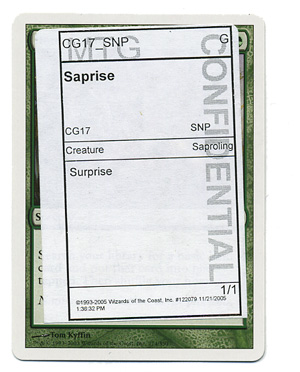 Saprise is a perfect name for this Time Spiral card. It's a Saproling, and it's got surprise. Except, of course, that surprise was renamed to "flash," and the card was changed from a creature to an instant because Saprolings really ought to be tokens. So it ended up as Sprout. 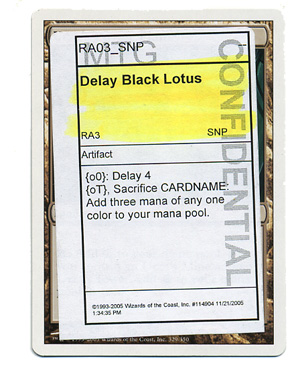 Delay Black Lotus is just here to demonstrate that not all playtest names are clever puns. Sometimes they're just there to remind everyone what the card does. Even though the mechanic changed to "suspend," it's still clearly Lotus Bloom. 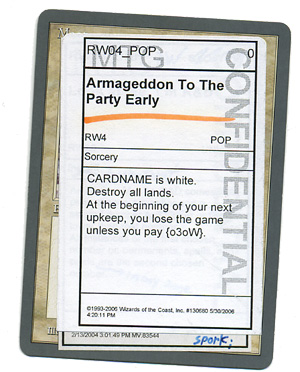 You can choose which of three things is the most interesting thing about "Armageddon To The Party Early." First, the name is a wacky pun on the word "Armageddon." Second, it appears to have been stickered on top of the Unhinged card Look at Me, I'm R&D, which itself was stickered on top of Moat. Third, what kind of deck do you have to be playing in order to make Pact of Armageddon a good idea?