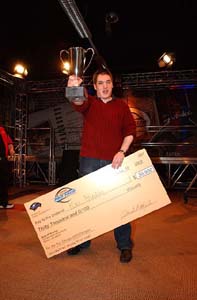 You might need to sit down for this one. It’s too shocking.

In a Top 8 whose star-power rivaled that of the legendary Pro Tour—Chicago 2000, Budde fought past three huge names to claim his title. First it was William Jensen, called one of the five best drafters of all time. Next it was none other than Jon Finkel, a clash that drew the day’s biggest crowds. Finkel had just edged out Fabio Reinhardt in the blue-red mirror, but was overrun by Budde's speedy red-black.

On the other side of the bracket, rising star Dustin Stern ousted CMU-TOGIT's contribution to the Top 8, US National Champion Eugene Harvey. He went on to fall to Nicolai Herzog, former European Champ and one of Norway’s finest, who had only barely escaped Bram Snepvangers’ bomb-heavy deck in the quarterfinals. That was good news for Budde, since Snepvangers is the only player ever to put a stop to Budde's Sunday. The finals were quick and brutal. Budde's deck performed as expected and Herzog was ill equipped to stop him.

So it seems Budde has proven his own theories about Rochester Draft wrong. Humble Pie probably goes down easier with thirty grand on the side.

Follow all the Sideboard coverage of 2003 Pro Tour Chicago.