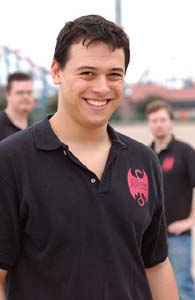 Anyone who ever badmouthed Cognivore as another unplayable junk rare just got proven wrong to the tune of thirty thousand dollars. In Oath of Druids, and in a format where Morphling was legal, it is the eight-mana flying Lhurgoyf that's the creature of choice. In the finals against his teammate Rob Dougherty, in the fifth and deciding game, Justin Gary tapped eight mana to summon a 12/12 flying beast. Shortly thereafter Rob was extending the hand.

You want to talk dominance? Forget for a second that YMG stormed the top of the standings last year at New Orleans, this time around they put an extra guy in the Top 8, and didn't lose A SINGLE GAME except to one another. Gary, Dougherty and Kastle, kept the swiss standings the way they were after Day 2, with them sitting one two three. And that with three different decktypes. No wonder so many pros are eager to don the red and black. Congratulations to Team Your Move Games for an incredible weekend, and to Justin Gary, Pro Tour - Houston Champion!

Meanwhile, in the Masters, Magic Invitational Champion Jens Thoren defeated Gary Wise in the finals. Read about all the action in the Sideboard coverage!