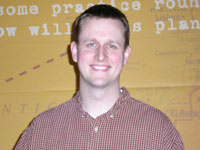 That's right, Bob Maher is the winner of the 2004 Magic Invitational. The event spanned five formats, five days, and two cities, and featured 16 of the game's best and most popular players from four continents. Maher and Sweden's Mattias Jorstedt rose to the top after 15 rounds of play, then Maher took down Jorstedt in the best of three formats. Maher won the Auction of the People 2-1, lost Mirrodin Block Constructed 0-2, then rallied to take the final game of Online Extended on the back of the Seething Song-Furnace Dragon combo!

Bob wins the right to design a card that will be included in a future Magic expansion and will feature his likeness in the art. (Past prizes include Darwin Kastle's Avalanche Riders, Chris Pikula's Meddling Mage, and Jens Thoren's Solemn Simulacrum.) Bob's initial submission was a sorcery that gave target player nine poison counters, a less-than-serious attempt that had us all a little worried. Since winning, he has vowed to come up with a more fitting serious suggestion. We'll keep you posted on what he comes up with here at magicthegathering.com!

For those of you without access to Magic Online, we'll have web coverage of the finals posted on this page on Sunday. For those that do have Magic Online, you can watch replays of every game played in this wacky showcase event by logging on and clicking the Magic Invitational banner. Congratulations Bob!

Read the full coverage of the Magic Invitational here. 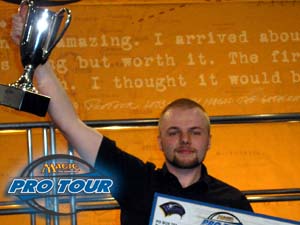 Herzog is the 2004 Pro Tour - San Diego Champion! Coming off a victory at the start of the year at Amsterdam's Rochester Pro Tour, Herzog was favored to do well in this event. All weekend he showed the skills that got him the Amsterdam title, and it was no surprise to see him sitting down at Sunday's draft. In fact, half the Top 8 were repeat performers from that Pro Tour and all of them made Top 4 or better. There was Mike Turian (saying this would be his last event), Anton Jonsson, and instead of Olivier Ruel (who finished 14th), his brother Antoine. Rounding out the table were amateur Angel Luis Perez Del Pozo, Rookie of the Year Masashi Ooiso, Player of the Year contender Ben Stark, and up-and-comer Mark Herberholz.

Herzog demolished Stark in a bloody quarterfinal thanks to Darksteel Gargoyle and Panoptic Mirror, then went on to eradicate Mike Turian (who 3-0'd Herberholz) with Greater Harvester. In the other bracket, Antoine Ruel's sick white-red was having trouble against Del Pozo, but pulled out the fifth game. Jonsson took care of Ooiso, and then went the full five against Ruel. Again, Ruel and his monstrous deck prevailed.

Kai Budde had even predicted this finals in his analysis of the draft, but considered it too close to call. The way the games played out, it was a massacre. Despite a mulligan and stalling on two lands Herzog took the first game thanks to Granite Shard. The Shard came up huge the second game as well, putting Herzog many cards ahead before he finished Ruel off. The third was very close, but when Greater Harvester hit play Ruel was hard-pressed to deal with it. Ruel was left permanentless before the end of the game.

With this win Herzog gets way out in front of the Player of the Year Race, in addition to the staggering accomplishment of back-to-back Limited Pro Tour wins. Congratulations to Nicolai Herzog, Pro Tour - San Diego Champion!

Read the full coverage of the Pro Tour here.