When Jon Finkel won Pro Tour–Kuala Lumpur last weekend, it marked his first Pro Tour victory since he won the 1999-2000 World Championship in Brussels on August 26, 2000. That 2,732-day drought is the longest in Pro Tour history between consecutive victories for a single person. Jon also holds the record for second-longest wait between PT wins, with 860 days coming between his first win in New York (on April 19, 1998) and his World Championship.

The shortest period of time between two Pro Tour wins is technically 56 days, which is how long it took Kai Budde to follow up 2001-2002 Pro Tour–New York (won by him, Dirk Baberowski, and Marco Blume on September 9, 2001) with a win at Pro Tour–New Orleans on November 4. The shortest time between two individual wins is belongs to Nicolai Herzog, who won 2004 Pro Tour–San Diego on May 16, 2004, just 119 days after winning Pro Tour–Amsterdam on January 18.

Here's the chart of all two-time winners and how long it took to win their second or later: 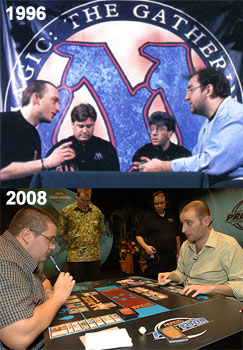 You could also include Dirk Baberowski on this list (won Pro Tour–Chicago on September 27, 1998; then won Pro Tour–New York with Phoenix Foundation 1078 days later). Actually, while we're at it, this seems like a good time to just provide a list of all Pro Tour winners. Enjoy!