is full of Darksteel Colossus, Phyrexian Dreadnought, and Krosan Cloudscraper. And yet these towering giants can look like insects when you're riffling them through your opening seven. Enormous creatures need cues in their art to convey their epic scale.

Take the Simic for example. They cook up modified monsters that easily outgrow their Petri dishes. Simic Ragworm is based on a real ragworm, a creepy-crawly, predatory coastal worm. But the Simic's bioengineered version, infused with autochthon blood, is big. So for scale, a tiny fleeing human is shown in the art. 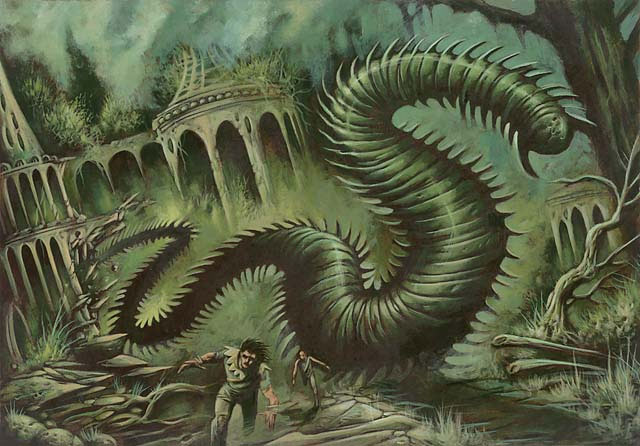 Momir Vig serves as the “for scale” element in the art of Experiment Kraj –see the little elven figure down in the right corner, near the purple blobby bulk of Kraj? Or check out the little Rakdos cultists cheering their master (or fleeing in terror) at the bottom of Rakdos the Defiler.

Flying creatures in Ravnica are often shown near the spires of Ravnican architecture to provide scale. Check out the art of the large (and potentially huge) elemental, Celestial Ancient. 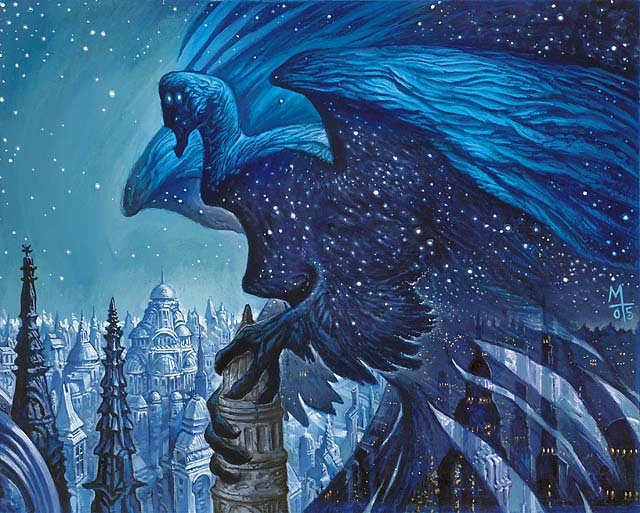 Similarly Simic Sky Swallower, Isperia the Inscrutable and the eponymous drakes of Leafdrake Roost are shown with towers to provide scale. See also Ninth Edition's Tidal Kraken for a scene of buildings vs. the power of the tide!

Now compare these with Azorius First-Wing and Trygon Predator. Notice how these relatively smaller flyers are shown flying through the city rather than above it? It's subtle, but it conveys the sense of a smaller size since these flyers are capable of flying between and among the spires, rather than perching only on the very tops like Celestial Ancient.

Check out the clever use of scale in Dan Scott's art of Fertile Imagination. At first you wonder whether you're seeing an enormous cytoplastic monster, when compared with the Simic spellcaster figure in the background. But then you see that the Simic-style saproling is attached to the head of a human-sized figure in the foreground! This spell allows Simic biomancers to turn thoughts into saprolings – and you can see that the saproling in the art, since scale is provided, is a proper size for a 1/1. 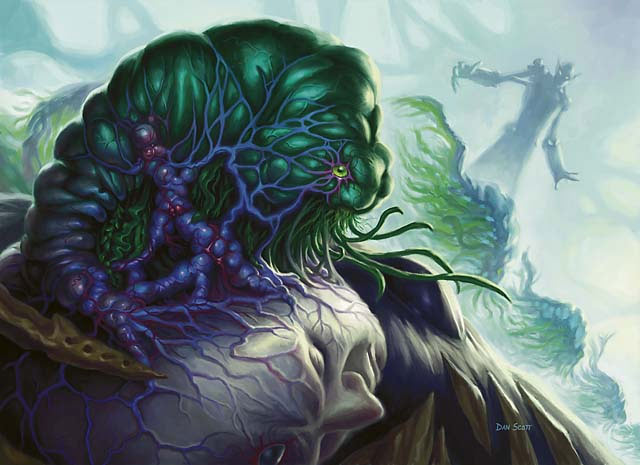