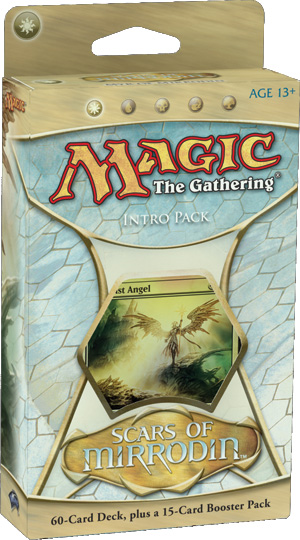 Myr Battlesphere creates an army of creatures in one card, and plays right into your plan with Inspired Charge. Of course, at seven mana, it's a bit pricey to cast, but Palladium Myr and Gold Myr can provide some of that mana. Be careful when casting Sunblast Angel, though—you don't want to destroy too many of your own creatures! But if you have a Razor Hippogriff in hand, don't be afraid to destroy your own artifact creature, then bring it back and gain some life.

The Scars of Mirrodin set contains even more resources for this Myr deck. Take to the skies with Auriok Sunchaser and some help from your artifacts. Return Myr from your graveyard with Myr Reservoir, which also helps you cast them and activate their abilities. Tempered Steel turbocharges your artifact creatures with a boost in both power and toughness. And when you protect your team with the powerful Indomitable Archangel, your opponents will be powerless to stop you! 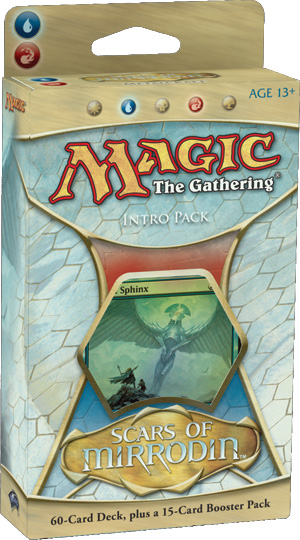 With the "Metalcraft" deck, you'll be taking advantage of a powerful new ability from the Scars of Mirrodin set. When you accumulate three artifacts on the battlefield, your creatures and spells with metalcraft will become even more powerful. Galvanic Blast doubles in damage from 2 to 4, all for a single red mana! Need help fi nding artifacts? Trinket Mage does the work for you, searching for cards like Memnite when it enters the battlefield.

Once you have metalcraft, use Lumengrid Drake to bounce an artifact creature back to your hand, then recast it to charge up Golem Foundry and gain a life from Golem's Heart. Or bounce your Trinket Mage to search up another artifact! Don't forget to save an artifact or two to cast after Embersmith and Riddlesmith hit the battlefield. They'll deal damage and let you draw more cards, probably more artifacts to keep the fun going.

Even more power awaits your deck in Scars of Mirrodin booster packs. Call on Trigon of Thought to draw extra cards each turn. Turn to the Grand Architect to pump all of your blue creatures, and to give your artifact creatures the same boost by making them blue. Kuldotha Phoenix is a 4/4 flier that just won't stay dead if you have metalcraft! 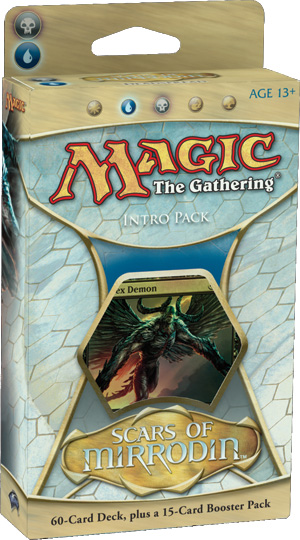 With the "Deadspread" deck, you'll reap a lot of rewards for a little bit of work. Your aim is to control your opponent's creatures by giving them -1/-1 counters. Then you'll proliferate, a new ability that allows you to add counters to permanents and players that have them. A single -1/-1 counter will soon become a real nightmare for careless opponents as you use Fume Spitter and proliferate to spread death. Or use the 6/6 Carnifex Demon to spread counters while flying in for some massive damage.

Proliferate affects other types of counters, too. Use it to refill Necrogen Censer, which can remove charge counters to make a player lose 2 life. Proliferate with a Culling Dais, after a creature has been sacrifi ced to it, to draw multiple cards. Have an artifact creature that's going to die from blocking or an opponent's removal spell? Sacrifi ce it to Throne of Geth to proliferate and get one last use out of your cards!

A host of powerful Scars of Mirrodin spells are waiting to take you to even greater heights. Inexorable Tide allows you to proliferate every time you cast a spell. Grasp of Darkness will help you take out an opponent's largest threat at instant speed. Or call on the dark powers of Geth, Lord of the Vault to return the most powerful of your opponent's artifacts and creatures after you destroy them! 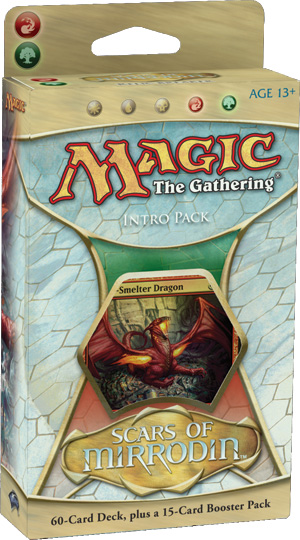 With the "Relic Breaker" deck, you'll punish your opponents who rely on the many artifact goodies in the Scars of Mirrodin set. The name of the game is beating your opponents down while blowing up virtually every card they play. Trouble from a creature that's picked up a pesky Equipment? Turn to Slag will deal 5 damage to the creature and blow up the Equipment all at once. Hoard- Smelter Dragon will eat your opponent's artifacts and attack much stronger for doing it.

To maximize your advantage, hold your artifact removal until you've cast Viridian Revel. You'll destroy your opponent's most prized possessions and draw a card each time you do so. Use Iron Myr and Copper Myr to cast Barrage Ogre ahead of schedule, then sacrifice the Myr to throw them at a player or creature for 2 damage. And if you wait until you have Molder Beast on the battlefield, you'll give the trampler +2/+0 each time!

More powerful cards are in store for you in Scars of Mirrodin booster packs. Looking for a powerful monster to add to your team of attackers? Alpha Tyrranax tips the scales at a whopping 6/5. Slice in Twain destroys an artifact and lets you draw a card all by itself. Spikeshot Elder's damage is limited only by the amount of mana you have. Liege of the Tangle's massive hulk tramples through your opponent's tough defenses and transform your lands into 8/8 attackers themselves. 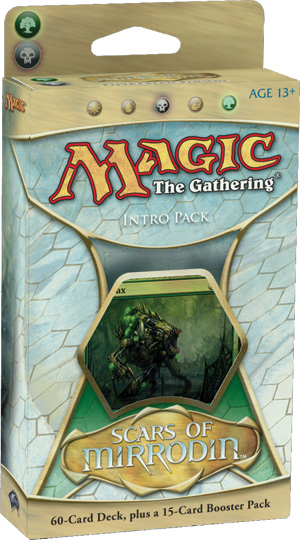 The "Phyrexian Poison" deck returns to an age-old victory path for defeating your opponents: poison! Infect your opponent with ten poison counters and you win the game. Putrefax can reach half that goal with one swing, while your Ichor Rats and Necropedes can make steady progress in the early game. The powerful infect ability ensures that your creatures' impact will be felt long after they're gone.

Use Corpse Cur to return your fallen creatures from the graveyard (like another Corpse Cur) to ensure you always have a creature on the battlefield. Worried about what to do if your opponent manages to stop you from attacking? Equip your creatures with Heavy Arbalest to poison your opponent directly, avoiding the combat phase altogether. Your reinforcements are immediately deadly with Hand of the Praetors, which gives your opponent a poison counter whenever you cast a creature with infect!

Find more cards to improve your deck in Scars of Mirrodin booster packs. Blight Mamba is deadly both on offense and defense, spreading poison with impunity. Protect all of your creatures with the powerful Asceticism, which stops your opponents from targeting them. Skithiryx, the Blight Dragon dominates the skies—an infectious 4/4 that will have your opponent dead in no time.

2 Assassinate 1 Rise from the Grave

1 Putrefax 1 Rise from the Grave
34 Cards

1 Hand of the Praetors 1 Putrefax
60 Cards