elcome to another edition of Sketches! It's Orzhov Week on magicthegathering.com, so we take this chance to look at a creature that both serves as an example of the haunt mechanic and that shows off the Orzhov's "bleeder" strategy, Blind Hunter. But first, some background on the artist, Warren Mahy.

Artist Warren Mahy is new to Magic illustration, having painted two Orzhov pieces in Guildpact -- Blind Hunter and Exhumer Thrull. Warren is a senior designer at Weta Workshop, the effects house that produced the Lord of the Rings feature films -- check out his bio and gallery to see some of his LOTR concept illustration.

The first step of the creation of a card's art is its art description. The art description tells the artist what the card will do, what its flavor is, and what the mood of the illustration should be. Here were the instructions given to Warren for Blind Hunter:

Color: Black/white (B/W guild)
Location: sky over Orzhov area
Action: Show a very large albino bat, perhaps with some gold armor plating to show that it's a trained animal of the Orzhov guild
Focus: the large bat out for the hunt
Mood: It would suck enough blood to drain a man dry. 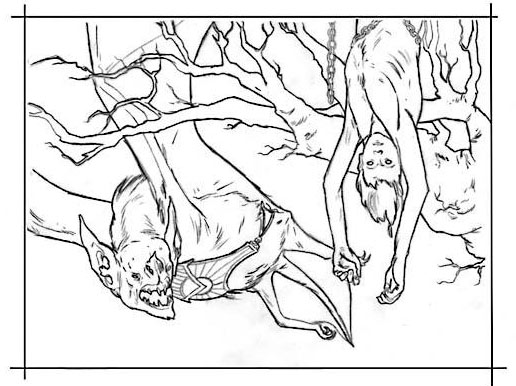 There it is in all its glory -- a huge bat, with its scale and hunger demonstrated by one of the bat's recent victims hanging in the upper right. There were mixed feelings on the creative team about the drained human; there was concern that it might draw too much focus away from the bat, but if the color were done correctly, it could fade into the background somewhat while still providing that scale for the bat. 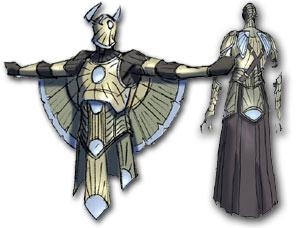 As you can see, Warren took these concerns to heart. The bat here is even more prominent, and he's used color and shading to have that drained unfortunate recede into the background. Note that he moved the bat in front of the tree in the final art, as well. Note further that the bat bears the gold armor plating suggested in the art description; it is reminiscent of Orzhov soldier armor (see the Guildpact style guide image, right).

Here's the card in its final state, as you'll see in booster packs of Guildpact. Get ready to drain your opponent for 2 (with a little help from Warren Mahy) with Blind Hunter!