elcome back to another edition of Sketches! Today we're looking at a card from Innistrad: Steve Prescott's Ghoulraiser.

Steve Prescott has illustrated 85 Magic cards. He shows up in Arcana a lot, and we've highlighted his sketches for Stonehewer Giant, Enlisted Wurm, Fauna Shaman, and Parallel Lives. And maybe others!

The first step of the creation of a card's art is its art description. The art description tells the artist what the card will do, what its flavor is, and what the mood of the illustration should be. Here's what Steve was given for the card:

Action: Show a zombie dragging a broken shovel shambling through a graveyard. In the background, another zombie has crawled halfway out of an open grave on its way to follow the first zombie.

Focus: The zombie with the shovel

Mood: Master told me to get more bodies. . .

Steve took note of the location of "Gavony graveyard" and made sure not to include any religious symbols from our world. The only symbol on a gravestone is the symbol of Avacyn! 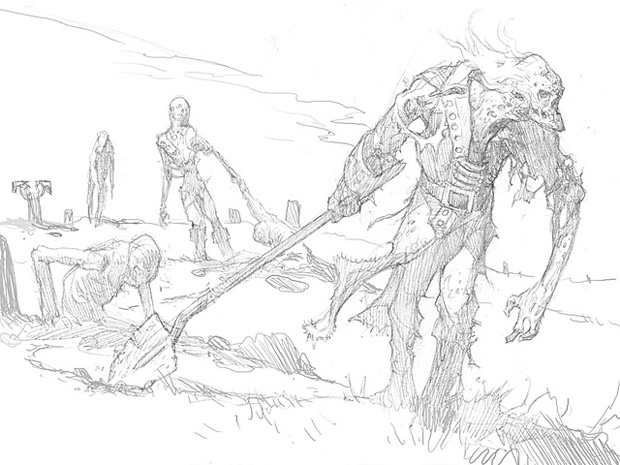 Ghoulraiser | Sketch A by Steve Prescott

The creative team liked most of it, but the head of the main zombie was a little too monstrous for them. They asked Steve to make the head more human, and here's what Steve turned in. 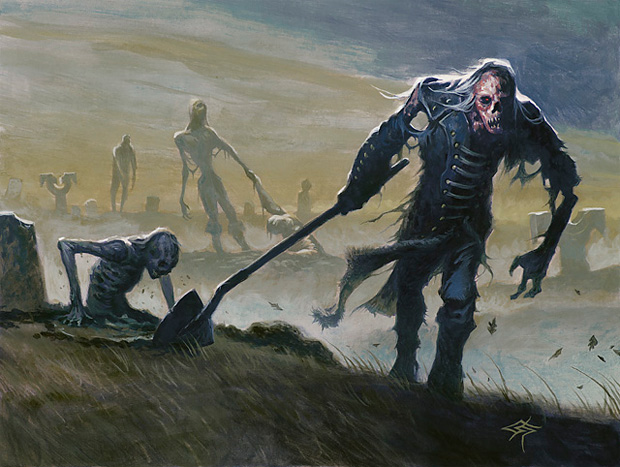