to another edition of Sketches! Today we look at the process behind illustrating that angry thunderhead of Balduvia, Lovisa Coldeyes. But first, some background on the artist, Brian Snoddy.

Artist Brian Snoddy is a Magic illustration veteran, having illustrated over 110 cards since way back in Magic’s Alpha release. You can see his work on cards such as Psychic Venom, Balduvian Horde, Incinerate, Mindless Automaton, Exploration, Hunted Wumpus, Overgrown Estate, Nantuko Shade, Temple of the False God, Rustmouth Ogre, Blinkmoth Nexus, and O-Naginata, among many, many others.

The first step of the creation of a card's art is its art description. The art description tells the artist what the card will do, what its flavor is, and what the mood of the illustration should be. Here were the instructions given to Brian for Lovisa Coldeyes:

Color: Red
Environment: It's all about snow and ice. The setting is artic, tundra, glaciers, snow dunes, etc.
Description: "Lovisa Coldeyes" is a legend and the leader of all of the Balduvian tribes. She is a very massive, muscular and powerful woman who demands respect from all warriors. She doesn't take any crap. She dresses in furs, leather and armor. She has blonde hair which is very rare for a Balduvian. 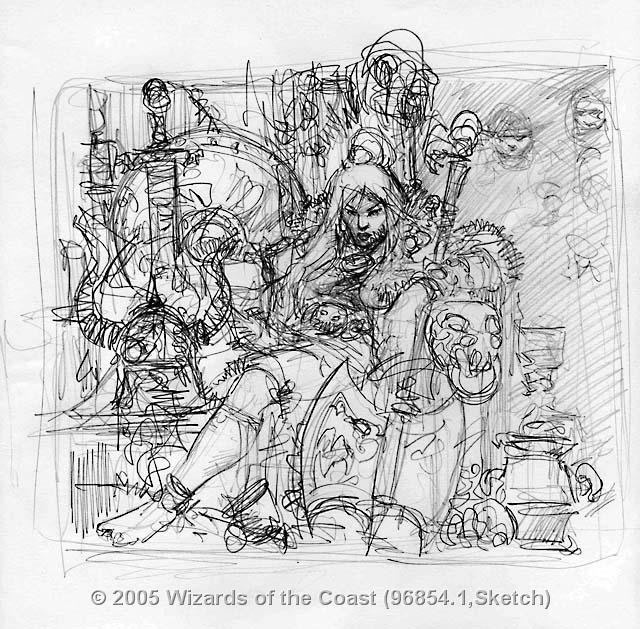 Here she is on her throne in her command tent, surrounded by the trappings of war. It looks like she’s luxuriating a bit too much here, however—she’s the type to get up to her elbows in her enemies’ blood, not slouch in her chair and order around barbarians. 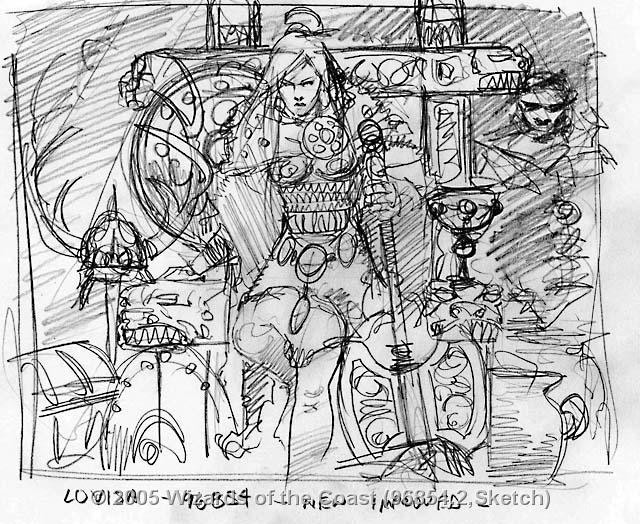 Here’s Lovisa at attention, stepping out of her throne to use that enormous axe of hers. At card size, however, Lovisa in this pose might be lost in the frame. She’s a legend, and a more zoomed-in shot might do better to communicate her personality and presence.

Here’s the third and final sketch. 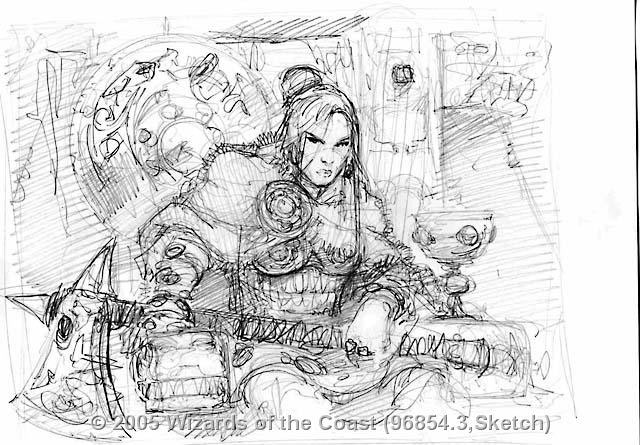 Here Lovisa is seated again, but this time with a commanding, shoulders-forward pose. She looks like she may be making a tough chieftain-type call—exile this insubordinate to the icy wastes, or simply bash his brains in and get it over with? Flank Heidar’s forces, or smash through the center of his cold-steel army?—and that immense axe is still resting on her lap. 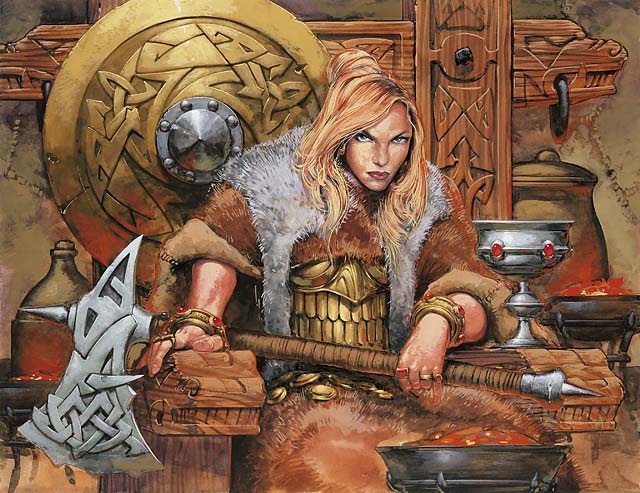 The detail really jumps out in this final. Check out the intricate, slightly animalistic carvings in her axe and in the shield on the wall behind her. Compared to the earliest sketches, her command tent has become simpler, almost rustic. She wears a few choice gemstones but her throne is a few heavy posts of wood ringed with iron. The helmets and swords in the first sketch have become a simple cup, and the hot-coal braziers reflect this battle-lord’s fiery temper.

Here's the card in its final state, as you can find in booster packs of Coldsnap. Get ready to beat down with berserkers (with a little help from Brian Snoddy) at the prerelease! 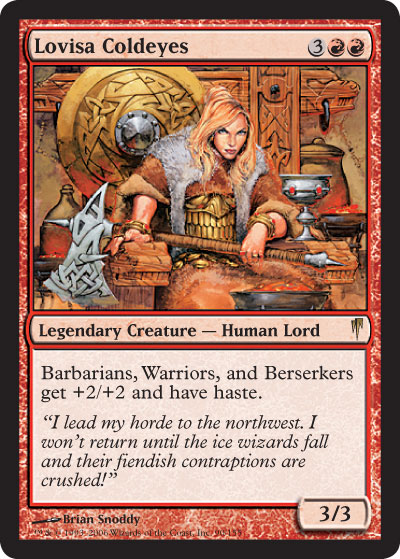