of the cards in Shadowmoor takes one creature and makes all other creatures copies of it. And as the art for Mirrorweave shows, that can have some odd consequences in their everyday lives.

Here's what Jim Pavelec was given to work with:

Location: Kithkin walled town
Action: Show a kithkin town square with many kithkin going about their business -- walking, selling goods, doing chores, standing guard, etc. There's a catch, though: All the kithkin are exactly the same. It's like a town populated entirely of clones of one kithkin.
Focus: The identical kithkin everywhere.
Mood: Creepy, surreal, like a waking dream

Jim's first sketch shows the aftermath of a Mirrorweave, with one bearded kithkin populating an entire town: That's certainly a lot of that one guy. But at this point, it could just be some kithkin that all happen to have beards and similar cloaks. So Jim pushed it a bit: 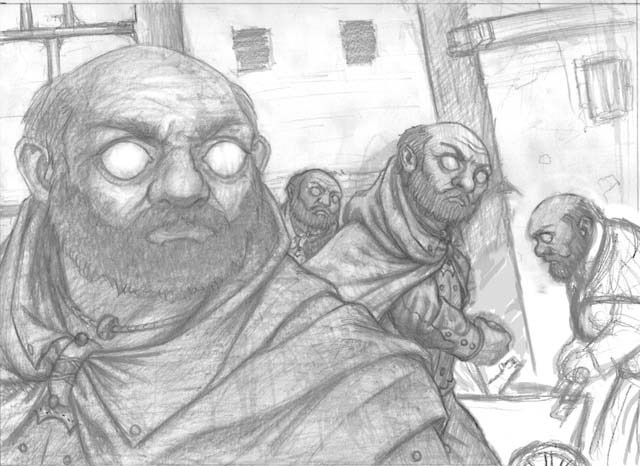 The final version adds some shadows and ominous coloring, as well as making it clear that the kithkin with a stroller is wearing a dress (underneath the cloak that everyone else is also wearing). And the baby is still there and probably still bearded. 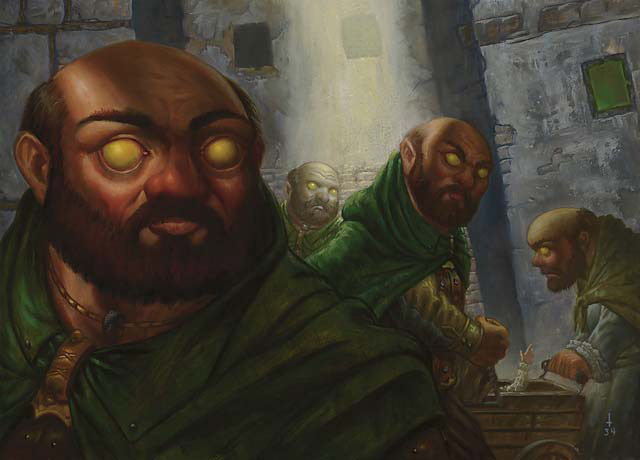 Here is the card as you can see it in booster packs.