elcome to another edition of Sketches! Today we take a look at a new goodie from Dissension in Omnibian. But first, some background on the artist, Jim Nelson.

Artist Jim Nelson has contributed over ninety illustrations for Magic cards during his tenure, having worked on cards in almost every block since Tempest. You can see his work on cards such as Foul Imp, Metathran Elite, Caves of Koilos, Petradon, Mythic Proportions, Summoner's Egg, Nezumi Graverobber, Belltower Sphinx and Putrefy, among many others.

The first step of the creation of a card's art is its art description. The art description tells the artist what the card will do, what its flavor is, and what the mood of the illustration should be. Here were the instructions given to Jim for Omnibian:

Color: Green-Blue (G/U guild)
Location: Your choice
Action: Show a huge slick-skinned frog creature, about the size of a cow, with three bulging eyes instead of the usual two. This strange Simic mutant has the ability to transfer its own genetic pattern through its long elastic tongue. Creatures that it hits with its tongue temporarily assume the frog's general size and shape.
Focus: The three-eyed frog mutant
Notes: You may also choose to show the frog transforming another creature. If you do, it would be best to choose a creature that is in definite contrast to the size and shape of the frog. 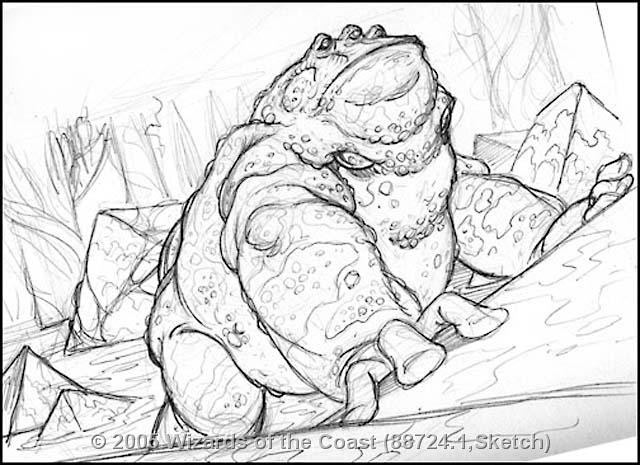 Jim wanted to try the frog without showing the DNA-transferring extendo-tongue; he was worried the tongue just might look too silly on the card. So he submitted the sketch with a straight frog pose, and left in the three-eyed detail.

The creative team liked the frog as-is, so they had Jim submit the full-color final art.

Jim submitted this final art. Note the cytoplasts on the frog's back and under its chin. Not quite enough to give this oversized amphibian the "Mutant" creature type, but an indication of its Simic experimental origins. 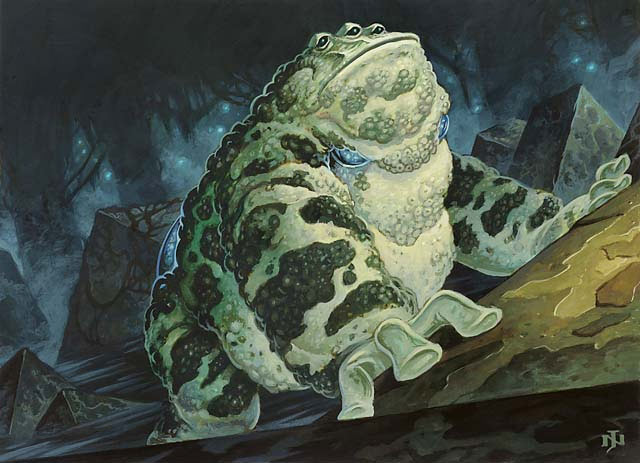 Here's the card in its final state, as you'll see in booster packs of Dissension. Didn't rip one at the prerelease? You'll get another shot at the release tournaments!