elcome to another edition of Sketches! Today we take a look behind the scenes of the creation of the art of the blue blocker-replicating spell from Guildpact, Thunderheads. But first, some background on the artist, Hideaki Takamura.

As one of the Japanese artists who was brought on to help illustrate Kamigawa Block, artist Hideaki Takamura has been retained since, and has contributed a dozen pieces of Magic card art from Champions of Kamigawa through Guildpact. You can see his work on such cards as Gutwrencher Oni, Sowing Salt, Yomiji, Who Bars the Way, Eye of the Storm, Shred Memory, and on Magic Online's art for Hunted Dragon's knight tokens, among many others.

The first step of the creation of a card's art is its art description. The art description tells the artist what the card will do, what its flavor is, and what the mood of the illustration should be. Here were the instructions given to Hideaki for Thunderheads:

Color: Blue-Red (U/R guild)
Location: Outside an U/R Izzet foundry
Action: This spell has the 'repeat' property -- the wizard can repeat the spell by feeding more mana into it. This particular spell creates floating guardian faces made of cloud and lightning to stop trespassers. Show at least two such faces floating 10' off the ground in a line (one more prominent in the foreground), stoically guarding the entrance to an Izzet foundry. Perhaps you can see a small indication of the would-be trespassers cowering from the cloud-faces that have appeared suddenly before them.
Focus: the cloud-faced guardians crackling with lightning
Mood: "You are not authorized."
Notes: This spell goes on again, again and again 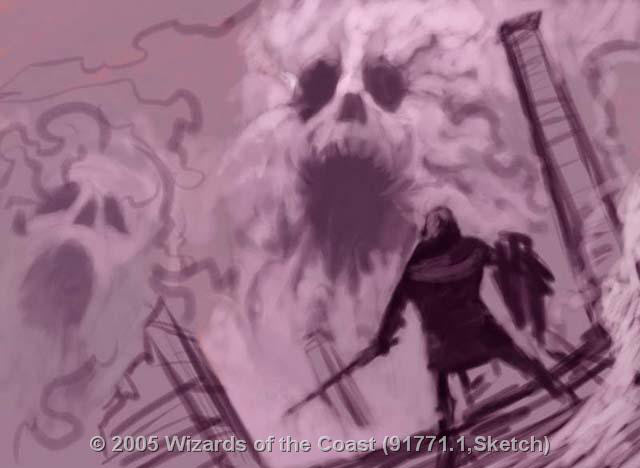 The first sketch does indeed depict "cloud-faced guardians", but these resemble howling evil spirits more than weirds. It's that composite form of two elements, plus a more stoic, neutral expression, that the art team wanted Takamura-san to go for. 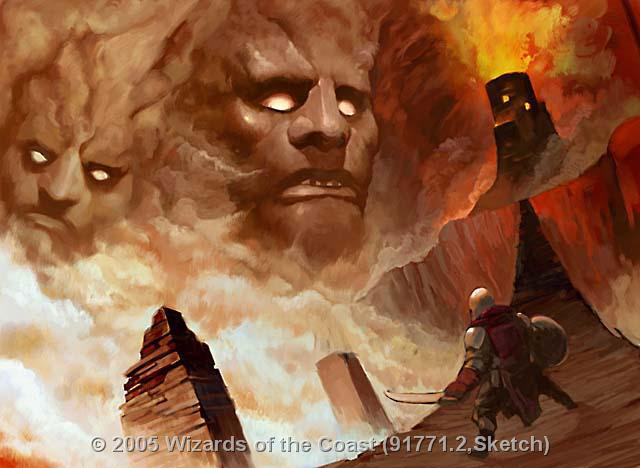 Quite departure from the first sketch, as you can see. And this is not so much a sketch, actually, as a final submission that was modified in production. The art team felt that while the cloud-faces captured much better the stoic feel of a forboding Easter Island statue, they lacked the composite-element look required by Weirds. In the final art, bolts of lightning and a blue cast were added to emphasize these creatures' natures as beings of elemental vapor and lightning forced together into an Izzet-serving whole. 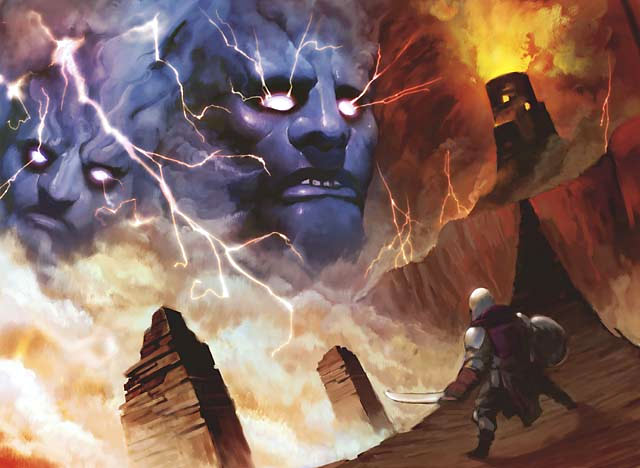 And here's the card in its final state, as you can see in booster packs of Guildpact. Whip up some instant-speed, cloud-faced, Weird guardians (with a little help from Hideaki Takamura) with Thunderheads!