art of a Magic card doesn’t show one moment of action, or even a second of action—it shows one time-slice, one frame of film, one frozen nano-instant. The strongest art represents the decision to show either the before, the during, or the after—anything else tends to muddy the presentation and look lousy in the medium.

If that’s the case, then how should the concept of “sudden change in state” be illustrated? You’d need to represent both the before and the after to show change, so how should that be accomplished?

In flavor terms, Time Spiral’s split second mechanic is concepted as a temporal stutter, a lightning-speed jump forward in time that changes things from one state to another in dramatic fashion. In visual terms, it’s the “jump-cut” you see in the cards here. Imagine the sound of a needle being ripped across a vinyl record, or the aural blur of an audio tape snapping ahead about a thousand revolutions all at once.

That creature that was completely healthy is now quite dead, and missing .

That gleaming, new sword is now crumbling from ages of rot.

That spellcasting effect from a permanent (an activation of Greenseeker, for example), is now bound up and unable to happen.

The split second visual cue is an exception to the “show only one instant of time” rule—it communicates not only a transition, but a sudden and dramatic change in the state of things across time. It adds one more weapon to Magic’s creative arsenal, and ties into the time-manipulation theme of the whole set. 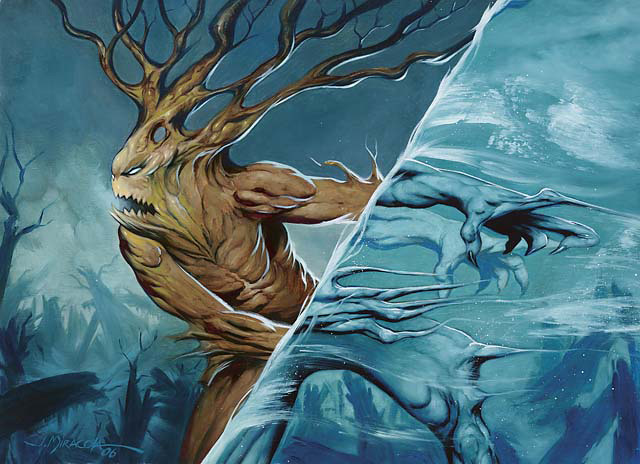 Wipe Away art by Jeff Miracola

An eyeblink later, all that remained of the tree-beast
was the breeze of its momentum.