The Status of the Symbol

id you know that the expansion symbol matters? It does! As it says in the Comprehensive Rules,

109.3. An object’s characteristics are name, mana cost, color, card type, subtype, supertype, expansion symbol, rules text, abilities, power, toughness, loyalty, hand modifier, and life modifier. Objects can have some or all of these characteristics. Any other information about an object isn’t a characteristic. For example, characteristics don’t include whether a permanent is tapped, a spell’s target, an object’s owner or controller, what an Aura enchants, and so on.

This means that if a card is copied, the copy will have the same expansion symbol. Why is the symbol a game-relevant thing? It's because of just three cards.

Of course, once something weird is embedded in the rules, it's fair game for Un- cards. Which means that three more cards were created in Unhinged to take advantage of rule 109.3.

Since the original Morphling could do just about everything, the comedy version got to do even more than everything, including the ability to change its artist or expansion symbol. In an all-Unhinged game, that could actually come in handy, thanks to...

...the explicit reference to City in a Bottle! 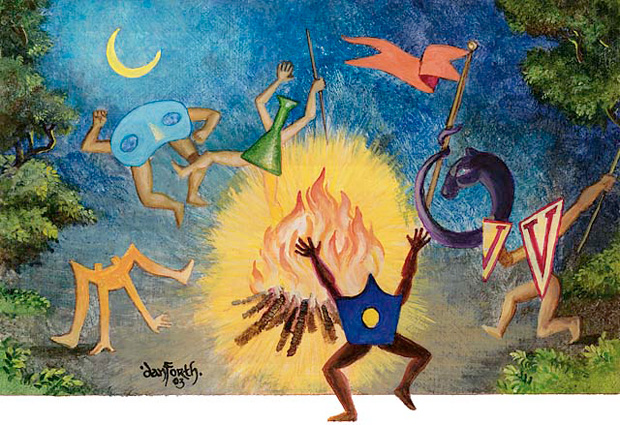 From left to right, there's the symbols for Onslaught (a morph spider), Mercadian Masques (a mask), Urza's Destiny (a beaker), Fallen Empires (a crown), Torment (a coiled serpent), and Visions (a capital V, or the Triangle of War). And then the card itself has an Unhinged symbol with legs!

However, that's only the expansion symbols with legs. There's also Alliances (the flag held by Torment) and The Dark (the moon). And technically,the fire in the center, while it wasn't an expansion symbol at the time, is now the symbol for Fire & Lightning!