n the days leading up to last year's Pro Tour–Berlin, French pro Raphael Levy started a group on Facebook called "Suit Up for Berlin." Raph declared his intention to wear a suit to the tournament and encouraged other pros to join him, in the hopes of making the Pro Tour look a little more … well, professional.

The idea took off, and on the first day of competition in Berlin, around 80 players, along with some Wizards staff and coverage reporters, showed up in various stages of suitedness, ranging from simple sport coat ensembles to full four-button suits.

After that success, the next fashion craze to hit tournament Magic was … mustaches?

Several months before Grand Prix–Seattle/Tacoma, a group of Seattle area players and tournament organizers formed a Facebook group encouraging other players, particularly locals, to grow mustaches before the event, with the simple goal of ensuring that their stop on the GP circuit would go down in history as "GP–Mustache."

There was some skepticism initially, but at the Grand Prix, it was plain that the idea had, let's say, grown on people. Although nobody got an official count, there were numerous players sporting the 'stache.

The culmination of the weekend for mustachioed Magic players was the so-called "Mustachevitational," a tournament—complete with trophy—open to anyone with a mustache. The mustaches themselves ranged from extravagant to wispy to patently fake—the organizers didn't discriminate against those who can't grow facial hair. 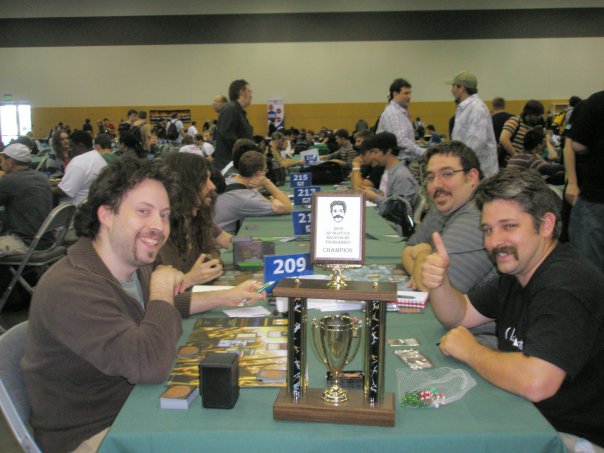 Mustachevitational participants pose with the trophy.

In a few short months, Magic "fashion" has gone from suits to 'staches. What should we expect to pop up next? Togas, maybe? You can find more Mustachevitational pictures from intrepid reporter Bill Stark on thestarkingtonpost.