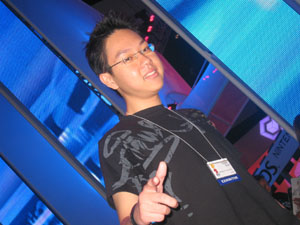 ongratulations Terry Soh! You are the 2005 Magic Invitational winner. Terry vanquished Resident Genius Tsuyoshi Fujita two formats to one in the Finals, defeating the Japanese star in Vanguard Sealed and Standard.

Not yet 18 years old, Soh was the R&D pick to attend this event after garnering attention this past year with a couple of Top 8s that were credited to his massive Magic Online experience.

The Malaysian wunderkind was near the top of the standings all week and started to pull away from the pack on Thursday with a 5-1 record in the Constructed formats. Terry put in work on every format before the event and was well-prepared throughout the week. The reward for his preparation will be a chance to design a card bearing his likeness in an upcoming expansion. Look for Jin, the Master of Disruption sometime next year -- and look out for Terry Soh at the next Pro Tour.

The Invitational is Magic's all-star game, and all the stars came out to shine this week including past Invitational winners Kai Budde and Bob Maher – two players with more than a combined $500,000 in winnings. Among the many highlights of the week was the unveiling of Bob's card, the product of his 2004 Invitational victory -- Dark Confidant, a 2/1 black wizard for with a particularly dangerous ability, will be featured in Ravnica: City of Guilds later this year.

You Can Watch the Invitational

Did you miss the Invitational? Simply launch Magic Online and click on the Invitational logo in the center of the Home screen. From there, you can select a format and watch replays of every game from the entire week!

Note: The first round of the Finals and the entire Champions-Betrayers Sealed Deck with Vanguard format can be viewed in the Auction of the People room.