ontemporary Dominaria has been ravaged by Yawgmoth's forces and by the impact of the false god Karona. Many of the Dominarian creatures that survived these catastrophes find themselves transformed by the toxic environment left in their wake.

Goblins are no exception-in fact, because they generally lack the (ahem) presence of mind to manufacture protection against the elements, they tend to feel more of the brunt of the environment's toxicity than other survivors. In these excerpts from the Time Spiral style guide, you can see the look and feel the creative team wanted for goblins: desiccated, but also lean, scrappy, and characteristically enraged.

The contrast between goblins of modern-day Dominaria and long-ago Dominaria is vast. Check out the goblins in these two Planar Chaos cards, Frozen Aether and Stingscourger: 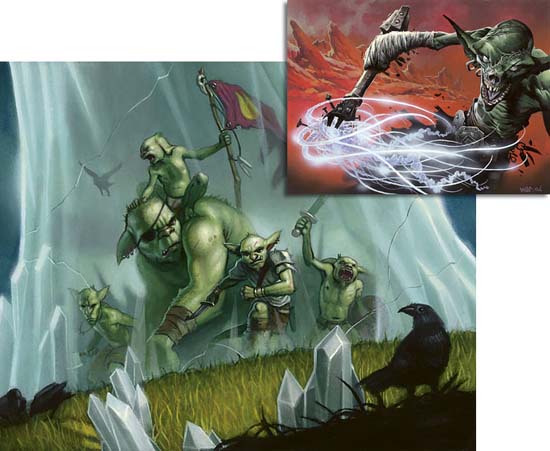 Frozen Aether is a timeshifted card, and therefore represents a scenario timeshifted from alternate-past Dominaria (in this case, it mirrors Kismet, a card from Legends). Although frozen stiff, those goblins appear whole and healthy.