s you may know, there are tokens in Return to Ravnica. But you might not know exactly what they look like. Let's fix that!

Bird tokens are always popular, right? And one of the cards that creates them is Eyes in the Skies, which gives us an excuse to show a card with populate. See what we're doing? Tokens... populate... it all makes sense!

Yes, the existence of populate means there are a lot of different token options. Soldiers are slightly smaller than Knights. They're also less vigilant.

If I could take a moment to share something with you, I want you to know that the Assassin token is my favorite token in the set. That's just a great token.

Centaurs are traditionally 3/3 creatures. And this one is no exception! Look, it's hard to think of things to say about tokens, okay?

Not all tokens have preprinted powers and toughnesses. Because who knows how big your Ooze is going to be? The answer is in your heart! 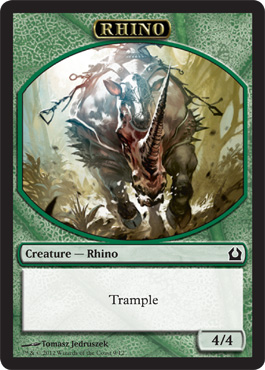 Whoops! It's another mysterious token. There are apparently Rhinos running around in Ravnica. You probably want to watch out for that.

Saprolings were introduced to Magic back in Fallen Empires with cards like Elvish Farmer and Night Soil.

Hey, here's something interesting! Did you notice that this is the only token with a guild watermark? Well, it is!