et's talk about the tokens you can get in Gatecrash booster packs! And when the tokens are created by cards in the Gatecrash Card Image Gallery, we can check those out, too! 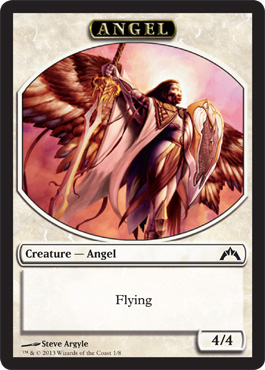 You never know when you'll need a 4/4 flying Angel! And you don't know how you'll get one, either, because the card that creates these tokens hasn't been revealed yet. Mysterious! 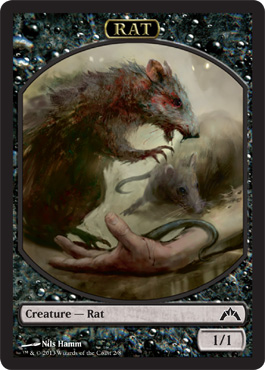 The card that creates these 1/1 Rat tokens also hasn't been revealed. Unless it gets revealed today, January 15! Which it might! You never know! Unless you have this handy list of preview cards here!

It's a good thing Deathpact Angel has already been revealed, because this is the kind of token that gives away a lot of information about where it came from. It's not just a 1/1 black and white Cleric; it's also in charge of being sacrificed to bring Deathpact Angels back onto the battlefield. It's probably nice for a creature to know what its purpose is so clearly.

Logically, these 1/1 flying Horror tokens ought to be nicknamed "Nightwings," right?

There are actually a couple of cards that create red and white 1/1 Soldier tokens in Gatecrash. And Sunhome Guildmage is one of them! 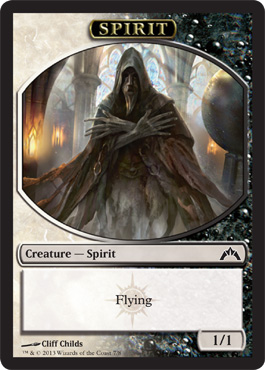 And now we arrive at a spooky black and white 1/1 flying Spirit token. Where did it come from? What does it want from us? There's no way of knowing!

Domri Rade's emblem isn't technically a token, but it shows up in the same place in booster packs. Neat, isn't it?