t's the first of two weeks of previews for Unhinged, a set that grew out of the ashes of the never-released proto-set, Unglued 2. Over the next two weeks Magic Arcana will bring you behind-the-scenes factoids of Unhinged and even some peeks at the Unglued 2 that never was.

Today, for example, we look at anthropomorphized vegetables. That's right.

One of the running themes of Unglued 2 was going to be anthropomorphic vegetable creatures that gave poison counters (because, you know, vegetables -- poison). Take a look at the art of some of these tough veggies. 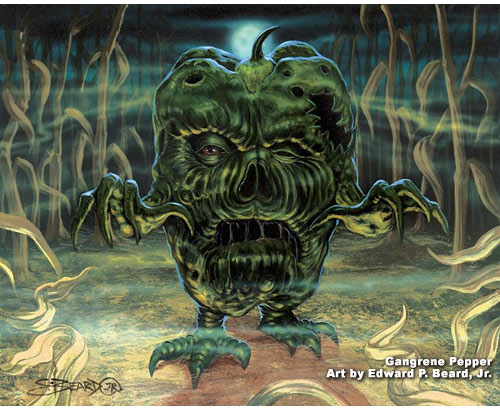 The poison-veggie theme was not carried explicitly into Unhinged, but you may detect a vegetable here and there in the art of certain Unhinged cards -- which indicates art that was carried over from Unglued 2.