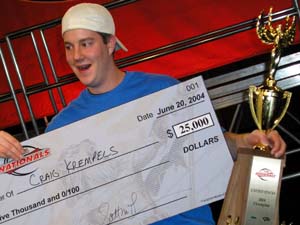 In what would prove to be Skullclamp's swan song in Standard, Krempels ran the CMU/Togit Elf and Nail deck through Alex Melnikow and William Postlethewait, before defeating Bill Stead in the finals. Krempels will leave Kansas City with the National Championship, a spot on the US team at this year's World Championships, and a sizeable $25,000 prize for his performance this weekend.

Bill Stead, like Krempels, is one of America's most talented young stars. Both players have had significant success in competitive Magic, but have yet to truly distinguish themselves on the international stage. In San Francisco they will have that opportunity with the help of "relatively unknown" player Ben Zoz. Even though this is his first top finish, his abilities shouldn't be neglected. Other players, such as Eugene Harvey, Gabe Walls and Brian Hegstad have all made their initial impact as members of the U.S. National team. Whether or not Zoz will continue the trend remains to be seen, but he will certainly be given the opportunity to prove that he is for real.

If American Magic needs a youth movement to return to its past glory, this team may be the catalyst. The rest of the world will be gunning for the team title, and it will be up to Krempels, Stead and Zoz to keep the trophy where it usually resides. Be sure to check our coverage in September, as we find out how this trio fares at World Championships 2004!

Check out the coverage here!