ack in January of 2009, the web team was stationed in the corner of the R&D Pit. At that time, our view was this: 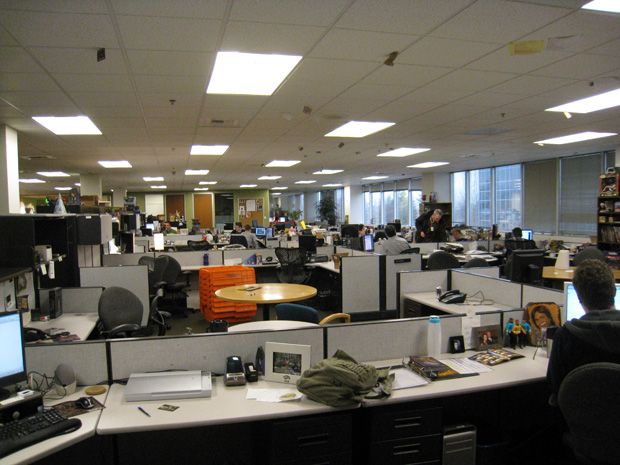 Pretty much in the center of that picture is the office of R&D Honcho Aaron Forsythe. It's that black rectangle all the way on the other side of the room. And just to the right of it is a beige rectangle that's a cork bulletin board. And one day in late February, that bulletin board suddenly looked like this:

That's a little small and hard to make out, but that's on purpose. That's pretty much what it looked like to the web team. But if you had been one of us and if you had been curious about it, you could have stood up and strolled over to the bulletin board to get a closer look. And what you would have seen was a note saying, "These aren't awesome enough... MAKE THEM SO." And next to that, all fifteen Zendikar mythic rares in their current state of design. They'd been put up there so that all of R&D could make comments on every part of the design.

So here, for example, is one of the cards with all the notes from when it was finally taken off the board. Don't worry about straining your eyes to read everyone's comments; we'll transcribe them after the picture. 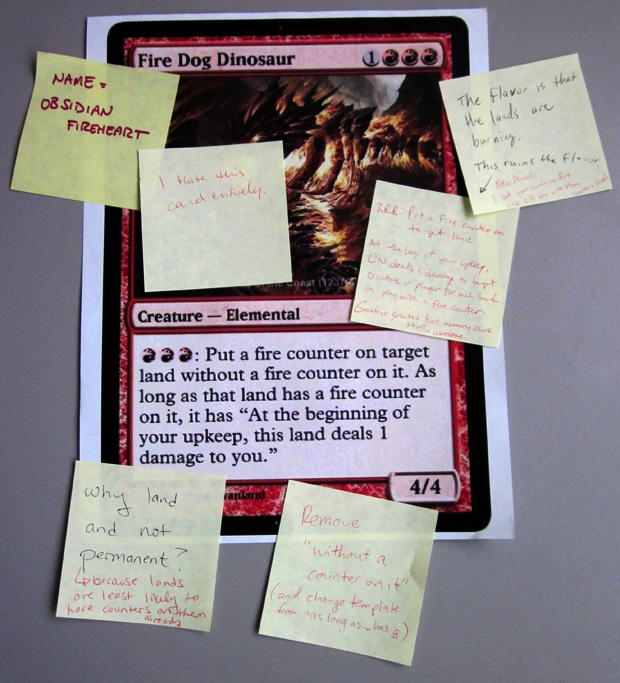 The playtest name "Fire Dog Dinosaur" was explained in Latest Developments in December 2009: it was Erik Lauer's description of the art that ended up on Obsidian Fireheart.

The authors of these comments are anonymous. This is partly to protect them and partly because nobody signed their notes anyway.

I hate this card entirely.

At the beg. of your Upkeep, CN deals 1 damage to target creature or player for each land in play with a fire counter.

The flavor is that the lands are burning. This ruins the flavor.

New flavor! I set your lands on fire and kill you with them. (worth a shot.)

Why land and not permanent?

because lands are least likely to have counters on them already.

Remove "without a counter on it" (and change template from "as long as ... has a")

And here's how the card ended up. The note about the lands burning appears to have survived as actual reminder text!