"What If?" with Odyssey art II

What if we always used the art that was submitted for each card? Well, things would certainly look different, and we like to think that they'd make a little less sense.

Here's how some familiar Odyssey cards would look if we kept the art that was submitted for them: 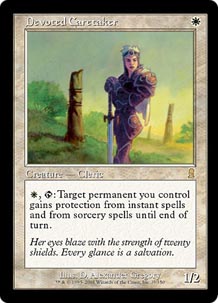 The woman in this illustration looks noble - devoted, even - but the problem is that she's so... so... green! Overall color tone is very important to card art, so accomodations were made for this art to be used on a green creature, namely Krosan Avenger. 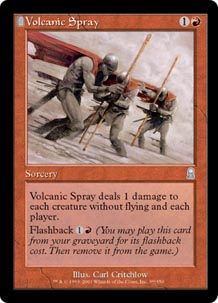 Originally, this red spell was going to be called something like "Sandblast." But the art did not have enough of a "direct damage" feel to it; the nomads looked like they were walking in a high wind, not a damaging blast. So late in the process, when R&D realized they were short one white creature, they stole this art from red and Tireless Tribe was born. 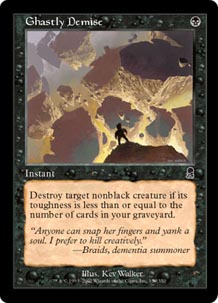 Ghastly Demise destroys a creature based on how many cards are in your graveyard, so the team wanted to show the ground rising up to kill a creature. The submitted painting was a bit too "dynamic" for a simple removal spell, so it was relocated to a more game-breaking card: Upheaval. 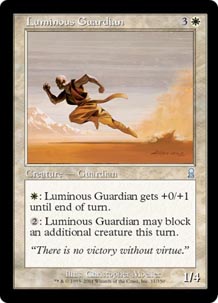 This card was concepted as a white nomad that could block more that one creature at a time "because he is fast." Think "hockey goalie," with lighting-quick defensive reflexes. The art, however, showed speed in a more track-and-field kind of way, not at all suitable for a defensive white creature. Need for Speed gave the art a perfect home, however.