ould you survive an ordeal for one of the Theran gods? There are five in Theros. Let's take a look at each one and see what's going on. 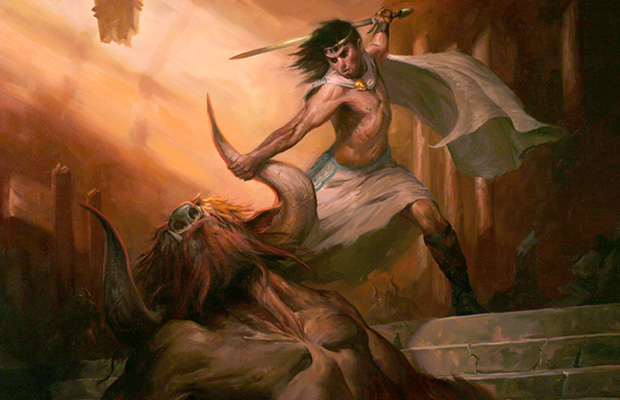 Color: White spell
Location: A cavern or dark labyrinth
Action: This spell represents a hero's journey. Show a young man from Meletis slaying a minotaur. The minotaur has partially fallen on its back while the hero has one knee jammed into its chest. The hero has yanked the minotaur's head back and is about to cut its throat with his sword. The hero is illuminated by a shaft of light. The minotaur can be partially off-frame. Keep the focus on the hero.
Focus: The hero
Mood: A heroic moment worthy of myth 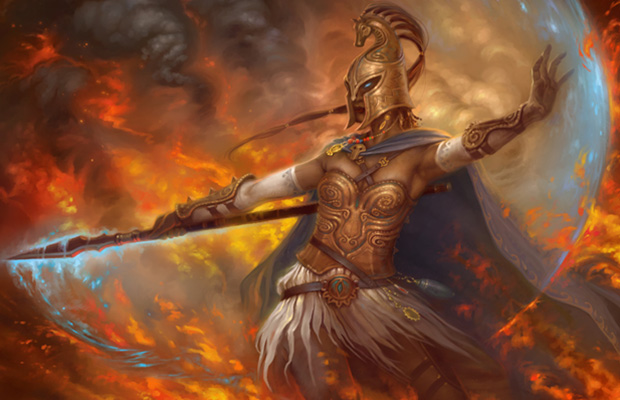 Color: Blue spell
Location: A sea
Action: This spell represents a hero's journey. Show a young female soldier standing on a patch of safe ground in the middle of an inferno. She's surrounded by a raging walls of fire, which she is holding back by magic.
Focus: The hero
Mood: Faced with an impossible task, the hero will prevail! 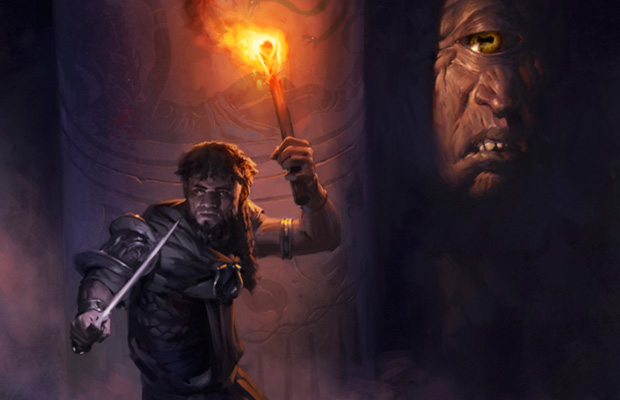 Color: Black spell
Location: Dark cavern
Action: This spell represents a hero's dark journey. Show an ambitious man who has travelled deep underground to find a precious object. He’s become lost in the darkness. In one hand, he holds a torch aloft. In the other hand, his sword glows faintly. In the background, one giant eye of a cyclops is illuminated by the torchlight. The hero is facing the camera as he peers into the darkness. He doesn’t know he’s being watched.
Focus: The hero
Mood: The hero is about to come face to face with his worst nightmare. 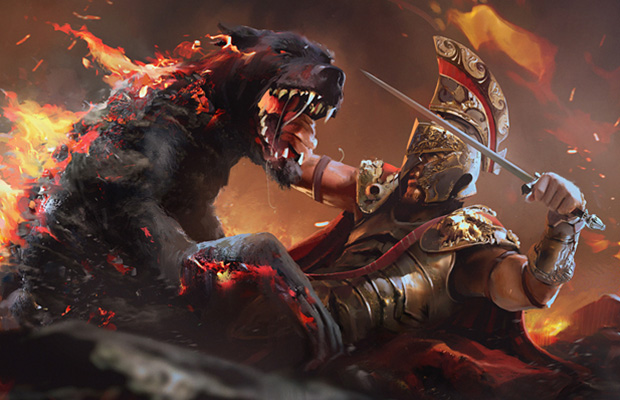 Color: Red spell
Location: A volcanic cavern
Action: This spell represents a hero's journey. Show a young male soldier of Akros fighting a hellhound in a volcanic cavern. The hero has fallen backwards as the hellhound pounced onto his chest. The hero is about to thrust his sword up into the hellhound’s mouth as it tries to bite the hero’s face off.
Focus: The hero
Mood: A heroic moment worthy of myth 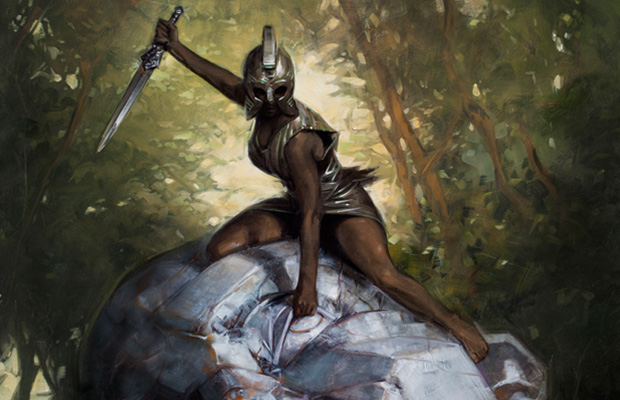 Color: Green spell
Location: Wild, ancient forest
Action: This spell represents a hero's journey. Show a young female warrior killing a 50-foot stone colossus. The giant monster has crashed to the ground. Keep the camera tight on the hero as she kneels on the colossus’ forehead (most of the colossus will be out of frame). Her sword is raised above her head with the blade pointed down. She is about to drive her sword deep into the enormous eye of the colossus. Focus: The hero
Mood: A heroic moment worthy of myth